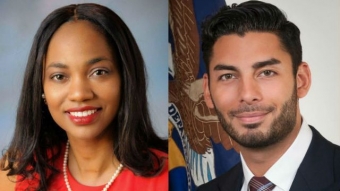 In the same announcement, which boasted raising nearly $100,000 for a potential run, the two-time congressional candidate said he wouldn’t enter the race.

“While this fact-finding mission and the advice of experts pointed toward a pathway to victory, my own soul-searching brought me to a different conclusion that I hope my supporters will understand,” Campa-Najjar said in statement.

He said that when he first ran for Congress against Rep. Duncan D. Hunter in 2017 “as the first Mexican-Palestinian American to do so,” his hopes were to give a voice to marginalized communities.

But he noted that San Diego’s 79th district has been represented by Shirley Weber for a decade. Gov. Gavin Newsom chose her to be secretary of state after incumbent Alex Padilla was tapped to replace Kamala Harris in the U.S. Senate.

"Moved by the weight of history and this moment of reckoning in our country, I strongly believe the 79th district should continue to be represented by a woman of color who will follow Dr. Weber’s legacy of fighting for equity and justice,” he said.

“Only three black women are in the Assembly, and only 17 Latinas. Equity in representation matters.”

He thus greased the skids for Weber’s daughter, Akilah, a medical doctor elected to the La Mesa City Council in 2018 — the No. 2 Democrat in a poll of the liberal-trending district.

After much consideration, I have decided to run for the 79th Assembly seat when it becomes vacant. It would be an honor to represent and serve the residents of this district and continue to ensure that we build a better tomorrow that improves the future for ALL Californians.

Officially, the Jamul resident has yet to make an endorsement.

“I look forward to supporting the right candidate for this seat, and pledge to continue answering the call of public service,” he said.

Campa-Najjar, born in La Mesa, said his roots were in the 79th Assembly district — his grandparents immigrating from Mexico to South Bay in 1948.

“My mother raised me in the district where I attended high school, worked my first job at Eastlake Church, and graduated from Southwestern Community College,” he said. “That’s why, at the encouragement of family and friends, I launched an Exploratory Committee to determine if there was a pathway to victory and if I was the right person to meet the moment for this seat.”