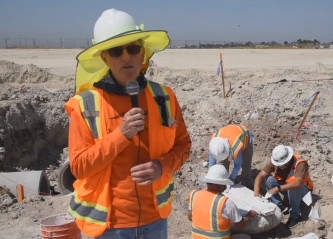 The fossils are estimated to be 16 to 28 million years old and provide new insights into the region's geologic history.

Dom Demere (photo), curator of paleontology at the San Diego Natural History Museum, says of the findings, “We’d never seen this before in San Diego County.”  The construction crew was cutting into sedimentary rocks when the discovery of small bones and later, larger bones were discovered by the museum’s paleontology monitor.

The fossils appear to be from a new geologic formation that has not been mapped before in the area. The deposit also contains plant fossils, as well as volcanic bombs (masses of rock ejected by a volcano).

Camels began in North America but later became extinct here, says Demere. The rocks are believed to be part of a Rosarito Beach formation. “But even in Baja California we don’t have mammals” in this formation, he added. Studying the ancient rock sediments could also yield information on the land and climate of our region at the time.

The museum will prepare, curate and catalogue the fossils into the paleontology collection, holding them in perpetuity for the citizens of California.