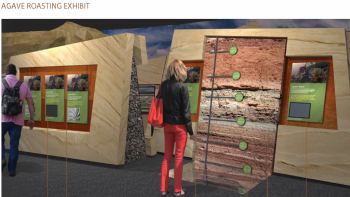 Howard Cook, chair of Jacumba Hot Springs Sponsor Group (the town's advisory planning board) believes the find should have impacts on future develoment projects pending in the area.

“This is highly relevant to the proposed Jacumba Solar project located next door and sharing roads with the under construction Eco project,” he told East County Magazine. “Certainly this calls for a cultural monitor and perhaps some preliminary excavating of the proposed site by [an] historical society and Native American historical/cultural experts."

A new exhibit at the Imperial Desert Museum displays a vertical graph showing the dig site strata above a replica hearth. Yucca, juniper berries, cactus and grass seeds were found in the ovens used by the ancient Kumeyaay people.

The exhibit will travel to other museums for nine months before being permanently installed at the Imperial Valley Desert Museum.