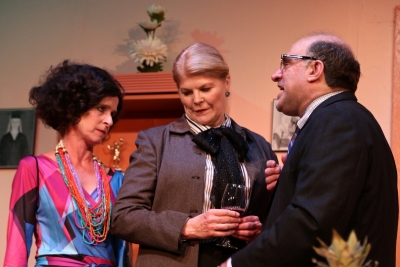 September 8, 2019 (La Mesa) - Life would be dull without the eccentricities that make us who we are. Pulitzer winner Paul Zindel presents us with the delightfully complex characters of three sisters in “And Miss Reardon Drinks a Little,” now playing at Lamplighters Theatre in La Mesa through September 22.  The story takes place on an October evening in the apartment of Catherine and Anna Reardon.

Catherine is the sister who drinks, Anna is the sister who has been behaving a little crazy and Ceil is the by-the-book emotionless sister, trying her best to do what is right. The sisters come together for dinner one evening in a slice of life story, which means there is really no ending. Bring in the side characters, each role completely different, and we have a feast of wonderful studies in human nature. 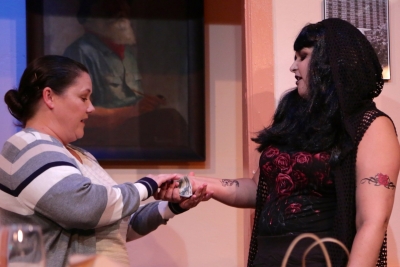 Catherine is played by Rhiannon McAfee, a master of characters. Susan Stratton plays Ceil Adams, the married sister, and Heather Warren plays crazy Anna. True talent abounds. The entire cast is amazing. Each character has their own issue. Great writing interweaves laughter and heartache, as you laugh and are touched in this dark comedy.

We also have a gum-snapping Gothic-dressed delivery girl played by Andrea Roebuck. Mrs. Pentrano played by Shannon Wolff, is a neighbor who sells Avon-like products. Others include Fleur Stein, played by the talented Amy Dell and her husband Bob, played by award winning James Steinberg. All of these rock. 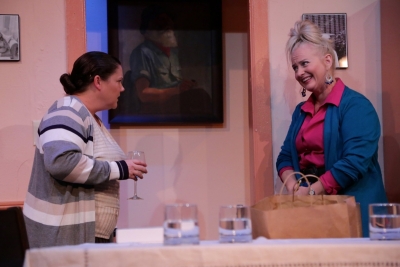 Character-driven plot, my favorite.  It's hard too pick a favorite; everyone is so great. But for some reason, I drifted toward Catherine.  Yes. the drinker and no, I do not drink. The fun in this show is the characters.

The next week promises more unrelenting heat. Is this the week you come in to cool off and support community theatre? Be a fly in someone else's life.

The play is directed by O.P. Hadlock. The charity partner for this show is Alzheimer's San Diego/Imperial chapter. Please donate in the lobby or online at www.alzsd.org.

And Miss Reardon Drinks A Little

Next show:  On Golden Pond 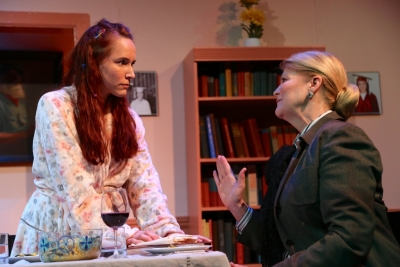