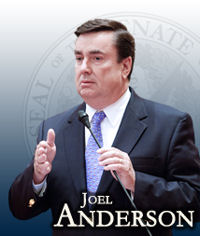 Below is the text of Senator Anderson’s letter to the Governor:

I am writing to share with you my grave concerns regarding the failure of Caltrans management to properly address serious allegations of fraud and negligence within the department. The case of Duane Wiles has been excellently detailed by the attached Sacramento Bee and Mercury News articles that raise disturbing questions about the managerial competence at the department, and a culture that seemingly has a lackadaisical attitude toward potentially criminal activity.

Mr. Wiles, as a Caltrans safety technician, falsified test results on bridge supports throughout California for a full three years after initial fraud was discovered by management.

Mr. Wiles also stole from California taxpayers when he billed for over 400 hours of falsified overtime while providing his fraudulent safety reports.

Instead of launching a full investigation into the extent of the fraud, management at Caltrans reinstated Mr. Wiles and allowed him to retire without repercussion. This action had the effect of condoning apparent criminal activity. It also brings to mind a simple question: what must one do to be fired by Caltrans?

Governor Brown, Caltrans is a Department that reports directly to your office and you have complete authority over its operations. Therefore, I respectfully request that you use the authority of your office to launch an immediate investigation to determine the managers responsible for this decision and take all appropriate disciplinary action, up to and including terminating the employment of the Caltrans executives responsible for reinstating Duane Wiles.

Your office has the authority to take serious action to uncover the wrongdoing, conduct a thorough review of the Department, and clean house. We should not wait until someone dies to finally address the problems at the Department tasked with building safe and reliable infrastructure for our citizens. Last year, I spoke to you about the billions of dollars Caltrans is wasting each year. Unfortunately, now I am forced to speak with you about how Caltrans has unnecessarily risked the lives of Californians by further covering-up criminal activity.

As always, I remain ready to assist you in this task. Many of my constituents and members of the media have contacted my office regarding malfeasance at Caltrans. I look forward to hearing your plan of action so that I may accurately share your response with them.