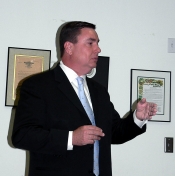 August 24, 2009 (San Diego’s East County) – Assemblyman Joel Anderson (R-Alpine) is asking constituents help to win passage of his Assembly Bill 1506. The measure would require the state to accept its own IOUs as payment from individuals and businesses who owe the state money for taxes, vehicle licensing fees or other matters. The bill has bipartisan support of 45 coauthors and has been endorsed by State Controller John Chiang, a Democrat. However the Chairman of the Assembly Appropriations Committee last week suspended the bill from being heard by the full Assembly, but has pledged to reconsider the matter on Wednesday.

The state has issued nearly $2 billion in IOUs since July 1. The Controller expects to begin redeeming IOUs in early September.

“Calfornia’s credit worthiness won’t be measured on Wall Street, but rather on Main Street,” Anderson said. “If the Appropriations Committee fails to pass AB 1506, then California will be sending a clear message to the investment community. If we don’t accept our own credit, why should anyone else?”

Anderson will present over 920 letters of support from taxpayers, small businesses, charities, local government agencies, healthcare facilities and business leaders. His office estimates the state would save $18 million by accepting IOUs, since the state will have to pay a 3.75% annualized interest rate over a four-month period.

Cities and counties, including San Diego, stand to benefit financially from Anderson’s bill, since the amount of IOUs exceeds what is owed in taxes and fees to the state. “The County could recover $78 million in less than a month,” Anderson said at the East County Chamber of Commerce’s “Politics in Paradise” event on Friday.

Opponents cited concern over the state having available funds diminished by accepting the IOUs, however the Chair has indicated he may reconsider the measure in light of cost-saving figures compiled by Anderson’s office.

Anderson argues that the state’s financial crisis is harming charities and nonprofits as well as cities, counties, businesses and individuals. He cites the example of Noah Homes in Spring Valley, which is owed six figures by the state yet can’t use its IOU to pay a hefty tax bill owed.

“We’re just trying to make sure the state lives within its means,” concludes Anderson, who requests that letters from constitutents on this matter be sent to him at Assemblymember.anderson@assembly.ca.gov.