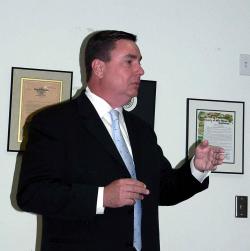 Firms such as internet service providers or telecommunications companies could potentially lose lucrative state contracts if they assist the NSA with data collection on their customers. The measure could even be used to cut off power to any NSA data collection centers in areas with municipally owned utilities.

This bill would also ban the use of electronic data or metadata provided by the federal government or a corporation that was obtained without a federal warrant, as specified, from being used in a state or local criminal investigation or prosecution.

SB 828 is based on model legislation called “The Fourth Amendment Protection Act” proposed by the Tenth Amendment Center under a project called “Nullify the NSA.”  It seeks to restore Constitutional protections against unreasonable search and seizure guaranteed by the Fourth Amendment.

A federal judge recently ruled that the NSA’s widespread collection of Americans’ phone records is unconstitutional, calling the sweep “near Orwellian.”

“All 317 million Americans cannot reasonably be considered to be suspicious simply for making or receiving telephone calls,” Senator Lieu stated. “The NSA’s blanket seizure of the telephone records of all Americans is therefore an `unreasonable seizure’ under the Fourth Amendment,” he added, noting that our Founding Fathers enacted the Bill of Rights because they understood the dangers of an out of control government, having fled the tyranny of English rule.

The measure is based on the concept of state nullification.  The Tenth Amendment Center explains that this concept began with then Vice President Thomas Jefferson when he authored what came to be  known as the Kentucky Resolutions of 1798. The resolutions made the case that the federal government is a creature of the states, and that states have the authority to judge the constitutionality of the federal government’s laws and decrees. He also argued that states should refuse to enforce laws which they deem unconstitutional.

James Madison wrote a similar resolution for Virginia and  asserted that whenever the federal government exceeds its constitutional limits and begins to oppress the citizens of a state, that state’s legislature is “duty bound” to interpose its power and prevent the federal government from victimizing its people.

On the other hand, high-tech firms or other companies fearing loss of business could oppose the measure—and Governor Jerry Brown has vetoed some recent consumer privacy measures if law enforcement voiced opposition.