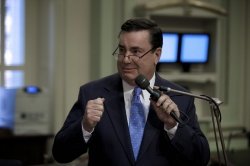 May 2, 2012 (Sacramento)--A measure by Senator Joel Anderson (R-Alpine) to establish a landmark pay cap on the annual salary of state employees was defeated last week the Senate Government Organization Committee. Current law places no limit on state employee salaries; SB 1368 would have set the limit at no more than the Governor makes ($173, 987) annually.

“The Governor and his Majority Party are asking Californians to raise their own taxes but that would be like throwing good money after bad because there’s currently no limit on lavish state salaries,” said Anderson. “Taxpayers, rank-n-file workers and students once again lose out to the fat cats at the top of the food chain.”

“Senator Anderson is to be commended for authoring this legislation,” said Senator Leland Yee (D-San Francisco), who voted for the pay cap. “The UC and CSU are starving our students while taking high salaries.”  The president of San Diego State University, for example, has a salary of $400,000, which the University of Califiornia president earns over $560,000.

“At a time when two million private sector employees are out of work and the state is facing at least a $9 billion budget deficit, the concept of shared sacrifice is an important one,” said David Wolfe, Legislative Director of the Howard Jarvis Taxpayers Association (HJTA). “It is hard to justify asking voters to increase their own taxes when 9,000 employees make more than the Governor.”

Anderson’s SB 1368 would have limited the annual pay of any state officer or employee to no higher than that of the Governor, which is currently set at $173,987.

In 2011, over 9,000 state employees were earning more than the Governor, above and beyond the national average for similar positions.