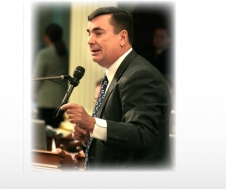 May 12, 2010 (Sacramento) - Assemblyman Joel Anderson (R-El Cajon) has introduced AB 2278, which will be heard in the Assembly Revenue and Taxation Committtee.  “By giving tax credits to California businesses in research and development, AB 2278 will help stop the hemorrhaging of California jobs,” Anderson said in an e-mail to local business leaders.  But whether legislators will approve a tax cut when the state faces a $20 billion budget deficit remains uncertain.

Assembly Republican Leader Martin Garrick, in a recent radio address , said the bill is necessary to prevent the exodus of companies such as McAfee, a Santa Clare computer security software company that has moved 1,000 from California to Texas, also expanding research labs in Oregon and Canada. “They applied for research and development tax credits nine times—but were turned down by the state every time,” said Garrick, who believes Anderson’s bill will encourage more companies to conduct ground-breaking research in California and keep high-wage, high-tech jobs here. The measure is part of a package of Republican jobs bills; Democrats meanwhile have launched their own jobs bills package.

California’s tax credit for research and development is currently higher than in most states, but lower than the federal government’s rate. This bill would raise California’s tax credit for increasing research expenses from 15% to 20% starting in 2010 and taking effect immediately. It would also conform California’s credit to federal AIRC percentages that were in effect as of January 1, 2007. The bill would not include basic research in social sciences, arts or humanities. For an in-depth discussion of the bill’s provisions, see Around the Capitol’s report.

The Assembly Committee on Revenue and Taxation has conducted an analysis of the bill's impacts.  According to the committee analysis, the bil is supported by BayBio, BIOCOM, California Taxpayers' Association, and TechAmerica. No opposition has been registered. However the committee analysis raises some concerns over fiscal impacts on an already cash-strapped state.

The analysis cautions that “in light of California's grim fiscal realities, the Committee may wish to consider whether the benefits of the marginal increase increase in the amount of California research activities that may result, in the long run, outweight the costs of reduced state funding for public services now, including schools and universities that produce highly skilled workforce for R&D companies.  Gauging effectiveness of the R&D tax credit, or knowing just how much is needed, is complex and complicated by tax privacy laws, the analysis noted.

In 2003, The Legislative Analyst's Office (LAO) recommended that no further expansion of the California R&D Tax Credit be approved without “convincing evidence that it is warranted” and further recommended that the Legislature consider reducing or phasing it out over time given the state’s budget deficit.

The Assembly Revenue and Taxation Committee’s analysis, however, does not support phasing out the credit, noting that “a California credit appears to be necessary for the state to remain competitive with other states in attracting and maintaining research and developmentbusiness activity, which not only creates desirable jobs but also allows other California businesses to adopt innovations developed locally more rapidly.”

Whether Committee members will approve increasing the tax credit in the state’s current budget crisis, however, remains to be seen.

The R&D tax credit is the last defense to keeping jobs in America. If the R&D tax credit was eliminated not only would the U.S. be losing jobs overseas, we would lose innovation and new product development to overseas competitors as well. Congress needs to make this tax credit, which is a significant benefit to small and medium size manufactures in the U.S., permanent. Paradigm Partners is a leading R&D tax consulting firm and assists businesses of all sizes to claim this credit. Paradigm Partners is a professional tax services firm delivering government sponsored incentives to companies ranging in size from $3 Million in average annual sales to upwards of $10 Billion. For more information on the R&D tax credit contact: http://paradigmlp.com Keith Woodard - Tax Consultant (503) 645-9590