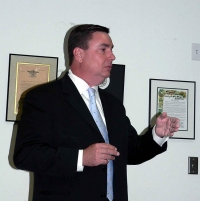 June 20, 2011 (Sacramento) – Legislation authored by Senator Joel Anderson (R-El Cajon) aimed at protecting taxpayers and businesses from the impacts of state-issued IOUs has been approved by the State Senate.

“What’s good for the goose is good for the gander,” stated Senator Joel Anderson. “Right now, the state IOU process is a forced-borrowing scheme at the expense of the taxpayers. This measure will offer taxpayers protection by forcing the state to accept its own IOU as payment.”

Specifically, Senate Bill 120 would force state agencies and departments to accept the state’s IOUs as payments for bills owed to the state. IOUs could be used, for example, to pay vehicle registration fees or state income taxes.

That same year, while in the Assembly, Anderson introduced a proposal similar to this year’s SB 120 to protect businesses when IOUs were issued in place of actual payments. Over 3,000 letters of support flooded Anderson’s office from businesses, citizens, and elected officials - including one from State Controller John Chiang, who also supports SB 120.

“When a person receives an IOU from the State, the State should accept the IOU for payment of obligations owed to the State,” stated Chiang in his letter supporting SB 120.

The bill sailed through both houses of the Legislature and had 70 bi-partisan co-authors. Governor Schwarzenegger vetoed the measure.

SB 120 passed the Senate by a unanimous vote of 39-0 and now goes to the Assembly for consideration.

I think the final billing value is is not this. In fact, all the politicians seems to have the same operating mode. They loose a lot of contributor money. asigurare casco