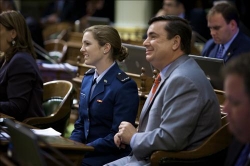 August 23, 2010 (Sacramento) – Assemblyman Joel Anderson (R-El Cajon) announced today that his AB 1506, a measure that would require the state to accept its own IOUs in payment for state taxes or fees, has passed both houses of the Legislature and is now on the Governor’s desk.

The state has issued IOUs to those owed money when the state did not pass a budget by the constitutional deadline.

Anderson praised constituents who wrote to support AB 1506, the IOU Taxpayer Protection Action. “Because of your unwavering support and thousands of letters, AB 1506 cleared both houses of the legislature without a single 'no' vote,” he said. “We are one final step away from total victory.”