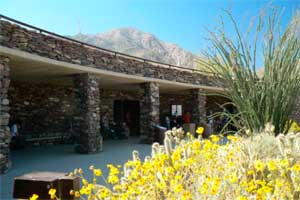 The state parks system was originally designed to be fee-supported and self-sufficient, a statement from Anderson's office noted. But over the years state parks have come to rely on more than $140 million from the General Fund annually. The budget proposal to eliminate this funding would result in over 80 state parks being closed to public indefinitely.

Anderson (R-El Cajon) has voted against all proposed state budgets that would increase fees or taxes to avoid deep cuts in state services. California faces a massive budget deficit that has resulted in deep cuts in social services and education as well as park closures. Public access to parks may seem like a lesser priority to some in comparison to more pressing needs, but residents of Borrego Springs disagree.

The small community of less than 3,000 residents is surrounded on all sides by Anza-Borrego state park. The local economy is based entirely on the 610,000 tourists who visit the park annually. The local Chamber of Commerce boasts 225 member businesses, all of them dependent on the park in some way. Chamber President Gwen Marie, owner of a Borrego Springs inn, says that closure of the park would be devastating to the community.

“If the park is closes down, so will our inn, along with every other business in town,” said Marie. “The tourists visiting Anza-Borrego are the lifeblood of this community. We can’t survive without them.”

Assemblyman Joel Anderson shares that concern. “In this economy, the end result of complete closure of the park will be closed businesses and lost jobs, which in turn will add unemployment costs to the state and dry up tax revenue,” said Assemblyman Anderson. “Cuts should be made surgically with a scalpel, not blindly with a cleaver.”

In a letter to the Department of Parks and Recreation, Anderson proposed an alternative: open the park seasonally for peak tourism months and replace a number of paid positions with volunteers.

“Anza-Borrego is most heavily visited during spring months, but sparsely visited during the heat of summer,” Anderson wrote in the letter. “If we can find a way to keep the park open for those peak months, this community can survive. Closing it year round will be devastating.”

Anderson also points out that outdoor internships, particularly in state parks, are the most sought after by college and graduate students. Likewise, many senior citizens value volunteer service opportunities at state parks as a meaningful way to contribute to the community and remain active.

“There are already close to 100 trained docents and other park volunteers in the Borrego Springs community and many more who would be willing to donate their time to keep the park open,” wrote Anderson.

“We don’t have to spend millions of dollars on a staff of full-time, year-round public employees in order to keep Anza-Borrego open for a few months of each year.”

Gwen Marie agrees. “Assemblyman Anderson is exactly right. We’re not asking the state for a handout. We’re just asking them let us help keep this park open during the tourist months and keep our community alive.”

East County Magazine  sent an e-mail to Anderson’s office asking whether he has plans to prevent closure of our region’s other popular state parks, including Rancho-Cuyamaca and Mount Palomar. We also inquired how vandalism or destruction of resources could be prevented if parks are staffed only part of the year.

Anderson e-mailed the following comments in response, received on July 21. “All of the budget proposals that include park closure have called for a complete closure. My proposal takes into account the positive cash flow to the state and surrounding area. I believe the net positive cash flow of each park should be considered in any overall closure plan.”

The Assemblyman did not comment on how his plan would protect Anza-Borrego from vandalism.  His comments suggest that he does not view keeping open non-profitable state parks, such as Rancho-Cuyamaca, as a budgetary priority.

Readers who wish to contact Anderson or other elected officials on this or other issues will find their contact information in our Citizens Action Center "Sound Off!" section.

The statement - “If the park is closes down, so will our inn, along with every other business in town,” said Marie." Is a Wild exaggeration.

The vast majority of year round residents would be unaffected whether the park closes down or is sold off. Most are well off retirees, with pensions.

In the winter we have the “snowbirds” coming to visit one of their homes and escape the cold. It will still be warm here, no matter what the CA budget does.

For business the depend on park tourism, maybe it is time to create year round business that can support the local population. Many tourist related business close up and leave town in the summer – creating an eyesore and leaving the town looking empty. They should be here year round.

If the state no longer can afford to keep it’s state parks – sell the land back to the people, at auction and balance the budget.

FYI, Palomar Observatory is not located within Palomar Mountain State Park and would not be directly affected by a park closure.