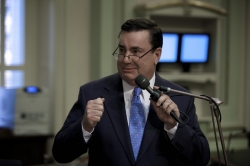 "There was no money laundering...I'm endorsed by the  Deputy Sheriffs, police, the CHP. Do you think they would endorse me if I was a money launderer?" - Assemblyman Joel Anderson

May 28, 2010 (San Diego’s East County) – Assemblyman Joel Anderson (R-El Cajon) has been dogged by the whiff of scandal since the Fair Political Practices Commission (FPPC) fined his campaign $20,000 for accepting five contributions over the legal limit of $3,900 per individual.

Opponents and some media reports have made references to money-laundering. For months, Anderson has said little on the matter, on the advice of attorneys. But in a phone call with ECM editor Miriam Raftery today, Anderson flatly denied any intentional wrongdoing and defended his integrity.

"There was no money laundering," he said, noting that his campaign reported all donations to the FPPC and voluntarily offered to return $150,000 in funds to donors when the FPPC informed his campaign that five donations received were in excess of the $3,900 legal limit. Those five donations were made by members of the Hamann Construction family, Barona and Sycuan Indian tribes, and SDG&E to a Republican Central Committee, which later donated similar amounts to Anderson’s State Senate campaign fund. Anderson noted that no criminal charges were filed and said that fines similar to those levied against his campaign are “common.”

Asked if he was aware that Republican Central Committee donations to his campaign had originated from those donors, Anderson said no. "We brought in a half million dollars back then. Nobody was watching it all," he said. "This was a flat-out mistake."

Asked specifically if he was denying ever asking individual donors to give money to a Central Committee for the purpose of bypassing limits on individual donations, he said, "I never solicited a donation for me. I'm the number one fundraiser for others in the Assembly, but not for myself." He said donating to Central Comittees was a common practice for donors who wanted their money to help in targeted races. He also added that campaign finance laws are convoluted, making it easy for mistakes to occur.

He added, "I've been endorsed by police, firefighters, the San Diego Deputy Sheriff's Association. Do you think they'd endorse me if I was a money launderer?"

A recent hit piece launched against him named Republicans against Anderson and criticized him on ethical issues. Anderson said the backers are undisclosed. “That’s illegal,” he said. He suggested the negative campaigning may be supported by developers with business in front of the Riverside County Board of Supervisors, of which his opponent, Jeff Stone, is a member.   A spokesman for Stone, however, said his campaign is unaware of who put out the anti-Anderson mailer.

Anderson also suggested Stone accepted large donations not properly disclosed. “How many busboys and students gave my opponent $3,900?” he asked.  (A check of Stone’s FPPC report  found one student who donated the maximum amount, no bus boys, but various other $3,900 contributions including a hair stylist and some homemakers. Through May 22, Stone has raised slightly over $230,000. Anderson has raised $503,601.

Several other Republicans are also running in the GOP primary for the State Senate seat being vacated through term limits by Senator Dennis Hollingsworth. The winner will face off against Democrat Paul Clay in the November election.