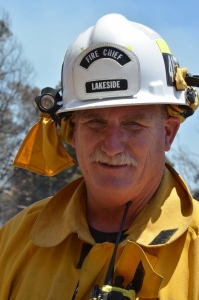 March 4, 2017 (San Diego) — Andy Parr has been appointed to serve as the County’s new Emergency Medical Services (EMS) Administrator.  Parr is best known in East County as the former Fire Chief of the Lakeside Fire Protection District, where he served for 37 years including during the Cedar and Witch Creek wildfires. Most recently he served as EMS/Fire Liaison for the County Health and Human Services Agency.

Parr is no stranger to the EMS community. He has worked as a paramedic, a full-time EMS coordinator, on the charter board of the County Fire Chiefs Association EMS section, a member of the FIRESCOPE task force and liaison to the FIRESCOPE EMS specialist group.   Parr has also participated in the county EMS’s Protocol Review Committees, interacted with hospitals for multi-casualty incident and exercises, and was a frequent instruction at paramedic programs on the topic of smoke and gas inhalation.

Their letter adds, “Of particular note was Andy’s experience during the Cedar Fire of 2003, where he was one of the initial attack fire officers, and the Witch Creek Fire of 2007, during which Chief Parr served as a Liaison Officer to the Incident Management Team.  As Lakeside’s Fire Chief, Andy continued his participation with the County Chiefs EMS section and served as the Zone Chief of the Central Zone made up of the 8 Fire Agencies in San Diego’s East County.”

As County EMS Administrator, Parr will oversee EMS, part of Health and Human Service Agency’s newest division called Medical Care Services.   His work will encompass pre-hospital care, hospitals, base hospitals, and special care such as STEMI, stroke and trauma.  He will be responsible for completing roll out of the CoSD LEMSIS project, which is a data collection system designed to give EMS providers, cities and other agencies data on their service as well as providing required data to the state EMS Authority.  The system integrates the many certifications, licenses and authorizations held by the county’s over 10,000 credential EMS providers working for more than 50 agencies in the county.