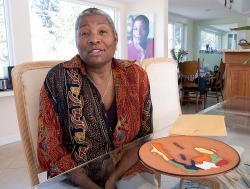 Born in Haiti’s capital of Port-au-Prince, Murat endured political oppression, struggled through economic hardship, was obstructed by a patriarchal caste system, and was stricken with serious illness – all before her tenth birthday. 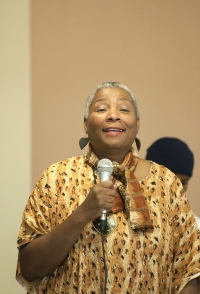 When her grandfather, an indigenous shaman, nursed her back to health it made an impression that set her on a lifelong path of helping others – a path that has traversed New York, Mexico, Jamaica and Wisconsin before reaching San Diego in 1982.

Murat has established numerous humanitarian organizations including the Health Through Communications Foundation (HTCF) and the Angels For Haiti Project, authored nine books, developed a cable television talk show called “Let’s Stay Healthy,” and donates services to Father Joe Carroll’s St. Vincent de Paul Village. In addition, Murat continues to give back to the people of Haiti, living by the words of her grandmother, “Never forget where you come from.”

On January 12, 2010, the catastrophic magnitude 7.0 earthquake shook Haiti to its core. The quake and its aftermath left 316,000 people dead and nearly as many injured. 3,600 people have died from cholera and more than 170,000 have been infected with the bacteria. In the first 150 days following the disaster over 250 rapes were reported. Today over 800,000 people remain homeless living in tent cities. 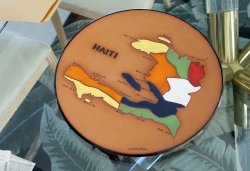 Multi-national corporations and powerful non-governmental organizations (NGOs) are currently pursuing disaster capitalism and are scheming to redevelop the island, export the oil, mine the gold and iridium, control the mango production, and build cruise ship ports, resorts, and golf courses.

“A lot of NGOs, a lot of people outside of Haiti make money on Haiti being poor,” said Murat. “The NGOs with their own interests, the big corporations, are the government of Haiti.”

Despite the dire state of affairs and seemingly endless field of obstacles, Murat has been able to circumvent the politics and corruption and deliver assistance directly to the Haitian people.

Murat estimates that she has raised $100,000 in aid for the earthquake survivors. She has been able to get the money to the people through existing channels from her previous work in Haiti and by electronically transferring funds using Western Union and MoneyGram. Both services waived their processing fees for earthquake relief for the first three months after the disaster.

Murat continues, “people come [with] the preconceived ideas [of] what they are going to do. They have the money in their pockets, so they’re kings, and they say, ‘We want to do this, we want to build your homes’ … and nothing is happening because they come with a concept of New York or California,” she said. “They never ask, those people on the ground, ‘What can we do for you?’… What I do works [because] I go to the people.”

Meanwhile, Angels for Haiti has built small one-room shelters for people in the area of La Vallee de Jacmel, a few hours south of Port-au-Prince but still inside the epicenter. They have fed 2,300 children, administered medical attention, provided food, seeds and water.

“We started feeding people on the 17th [of January, 2010] while the world was watching everyone starving, we were feeding. We were the first ones feeding people, and I have the pictures to prove it,” said Murat.  Among her  priorities were to help rebuild an orphanage devastated by the powerful quake.  For her efforts, Murat was nominated for East County Magazine's Outstanding Citizen of the Year Award in 2010.

As it turns out, the people of Haiti do not want big houses, Murat said.   When she asked them, “What can we do for you?” the answers included, “We’d like a school band” and “I want a job!”

Using a $30,000 grant from a group of Haitians in Switzerland, Angels for Haiti built three school gardens to help the people help themselves. “We take the land, flatten it, fence it, put in cages so we are going to have a garden,” explained Murat. “We are going to have seeds like a nursery, and in each community we are building a silo, we bring in water, irrigation, so we have a garden. They are going to learn how to grow food. In their little huts, they want food and for their kids to go to school.” The people will learn to feed themselves, sell the excess food on the open market on market day, put their kids through school and rebuild their homes.

“So, how much progress [are] we doing?” asked Murat, “Lots of progress in my locality with the leaders, with the people I work with. We just need money. We [can] do more.”

As we parted ways, I’m pretty sure I felt a gentle breeze, perhaps from her wings.

To learn more about Murat’s Health Through Communications Foundation, Angels for Haiti, or to donate to her cause, please visit www.healththroughcommunications.org or click the donation box (left) on this page.