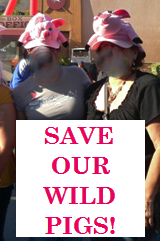 The federal government’s plan calls for hunting, traps, and aerial shooting to halt the destruction of the non-native animals.

SOWPAC initially proposed an adoption plan for the pigs, similar to the method used by animal activists to save wild burros in Arizona made popular by the book Brighty of the Grand Canyon.

But unlike the burros, wild boars have sharp tusks and short tempers, making them poor candidates for adoption as pets or companion animals.

Instead, SOWPAC’s plan calls for construction of a second fence paralleling the U.S.-Mexico border wall in southeast San Diego County.  “Cost to construct the fence will be offset by savings on Border Patrol officers’ salaries,” Hogg concluded.  “We believe the new “pig patrols” will be more effective at dissuading illegal immigration and will cost less than conventional border patrol methods, saving taxpayers money while improving border security and saving our wild pigs.”