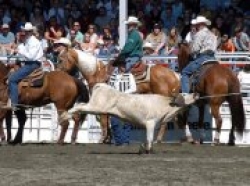 April 20, 2012 (Lakeside)—“Animals suffer both physically and mentally throughout these barbaric, violent, `entertaining’ practices,” the Animal Rights Protection and Rescue League of San Diego has posted on its Facebook page, urging a boycott of the Lakeside Rodeo.  “They are incredibly scared, stressed, and uncomfortable.”

In its call for the public to “buck the rodeo”, ARPRL says that electrid prods, s 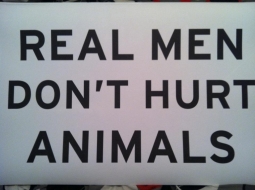 purs and bucking straps are used to “irritate and enrage animals” used in rodeos to simulate “wild behavior in order to make cowboys look brave.”  Cows and horses are often prodded with an electrical “hotshot” to produce pain. PETA reports that some animal control officers have found burrs or other irritants placed under flank straps and that the straps can cause burns or wounds.

Rodeos can also result in animal fatalities. In Cheyenne, Wyoming, four animals died in the 2010 Cheyenne Frontier Days and three died in the 2011 event. These included a bucking bronco that fell and broke its back, a calf that a broken leg during the rodeo competition, and a wild horse that fell and broke a leg after a race.  About 5,000 animals overall were used in the competition. Another 7 and 10 were injured in the event both years.

Giant applause for the protesters. In addition, rodeo promoters try to say it's tradition and heritage. Well guess what: It is NOT. NO rancher would allow his remuda (horse herd) to be so mistreated, let alone allow calves to be jerked with many having their necks or backs injured--or have to be euthanized. Anyone who did that would be fired. Plus, the object was to get the horse to STOP bucking, but rodeos torment them to fight or flight, fear bucking. That's not our heritage.
One rodeo secretly brought injured calves out of the arena on a skid supposedly to be euthanized, but since they can't go to slaughter with the chemicals, the injured animals were dumped in a truck where no one could see, until they could go to slaughter at the end of the rodeo. Rodeo mentality and morality is the same as dog fighting and must be banned.

i am so proud of the protesters for bringing to light this cruelty of rodeo.decent horsemen and women don't approve of cruel rodeo. it's very sad to watch baby calves roped, choked, clotheslined, dragged by a rope from the cowpony while the cowboy sits on them. just heartbreaking to see them choked into anoxia with their tongues hanging out and eyes bulging. many horses and cows are injured and killed for paying spectators enjoyment. it's disgusting and cruel and needs to END. keep up the good work in shining the spotlight on this evil pastime.