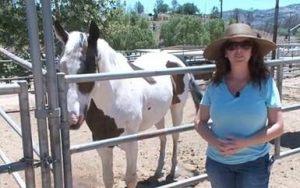 May 22, 2014 (San Diego's East County) - Nearly all the animals rescued by the County Department of Animal Services during the recent wildfires are back home with their owners.  Animal Services rescued more than 50 animals when fires broke out across our region last week. In all six cats, four goats, 18 dogs, 21 horses, an emu and a bird were taken in to the department’s care. Only three cats remain. Animal Control officers also helped a couple dozen owners evacuate their horses to locations other than the shelters. Officers evacuated between 40 and 50 head of cattle from just one ranch alone.

Animal Services says pets should always be a part of your disaster planning. Microchips have shown time and again their ability to reunite lost animals with their owners quickly.

“It could save your pet’s life,” said Animal Services Director Dawn Danielson. “We have rescued hundreds of animals during past fires and the first thing we do is check for a microchip.”

Every Thursday, the department’s three shelters microchip and register dogs, cats and rabbits for $10. The department also holds microchipping and registration events at various locations throughout the year.

Another new tool is a smartphone app called Finding Rover. Animal Services is the first sheltering organization in the nation to begin using the free app, which uses facial recognition to match lost and found pets and can be used by anyone. Animal Services updates its database of animals with Finding Rover several times daily so if your pet is turned into the shelter, you can check your smartphone or computer to see if he’s there.

“We help people evacuate themselves and their horses out to an alternate facility,” said Animal Services Deputy Director Harold Holmes. “We do not provide vehicles or trailers but we’ll help you load a horse that might be a little spooked by the smoke or one that is not used to a trailer into one and direct you to an evacuation center.”

Animal Control Officers also responded to reports of animals “at large.” In one case a woman turned her horses loose because she didn’t have time to load them. When Animal Services arrived, someone had already managed to contain them and get them out of the area. In another instance, two dogs were turned loose in Carlsbad because a resident couldn’t get anyone to drive them out. Officers found one and rescued it. The owner found the second dog Wednesday. The animal was still running the streets when he recognized his owner and went to him. The dog is OK.

“This is going to be a very long fire season. We have the potential for more and bigger fires,” said Holmes. “This incident serves as a wake-up call to review our disaster plans and get better prepared.”