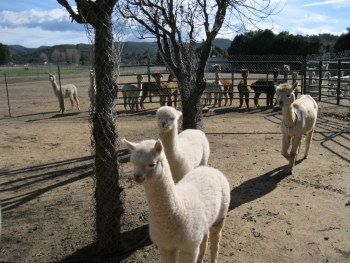 You can meet the alpacas at an open house Feb. 11

February 3, 2017 (Descanso) -- “David is a unicorn,” says Amy Alyeshmerni, referring to David Kabbai, her partner of six years in life, love, and business. ”Here is a man who owns a ranch, loves animals, and wants us to spend every other Friday with his mother for Shabbat dinner. How unusual is that? I am very lucky!”

Indeed, they share a bucolic life on their alpaca ranch. 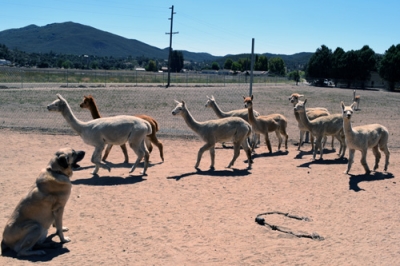 David Kabbai is an unusual man. He is a Persian Jew who left Iran when he was a teen and came to live in La Jolla. Although extremely smart, he struggled with academia, but still managed to get into UCSD. Nevertheless, he felt happier working with his hands and problem solving, so he dropped out to open a successful business, DaMar Plastics with his family’s blessing.

However, he still wanted to do something more, get out of the hustle and bustle of the city, and work with animals. After doing some research and making numerous trips to Descanso, he sold his business and bought a 14 acre ranch in the countryside where he could raise alpacas and live a rancher’s life. Today, Kabbai and Alyeshmerni live on the ranch- Atlas Alpacas -with 65 alpacas, two dogs, two cats, one rooster, and various chickens. He is in his element working with the animals, fixing things, and he recently began remodeling their house. 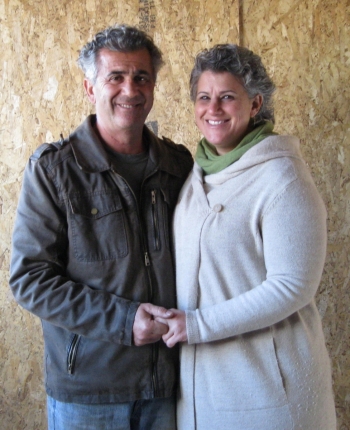 Amy, a “city girl”, originally from St. Louis Park, a suburb of Minneapolis, fell in love with the country lifestyle and all that it offered. She doesn’t mind commuting to work in downtown San Diego. She is a leasing manager for Westfield Shopping Centers, and is focusing on the redevelopment of Horton Plaza. After a hard day’s work, she comes home to the peace and serenity of the ranch.

The ranch truly offers a break from city life. It is a lovely haven. When I first drove up, I was greeted by two sweet Anatolian Shepherds. Caleb, the 155 pound male, tried to climb in the car with me when I opened the door! Tika, the female, wanted me to pet her and followed me around. These two gentle giants are also loyal guard dogs whose duties include guarding the alpacas from predators. They usually work all night guarding the herd and relax during the day. These dogs originated from the Anatolia region of Turkey and are known for their intelligence and strength. 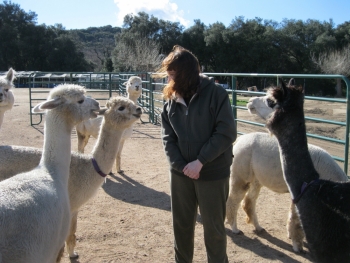 The stars of the place are the 65 cuddly and curious alpacas. Some of the alpacas belong to a good friend who is also in the alpaca business. Actually, alpacas are not usually cuddly, and they sometimes spit, but these alpacas are used to people and come right up to sniff you. Some even give you kisses. 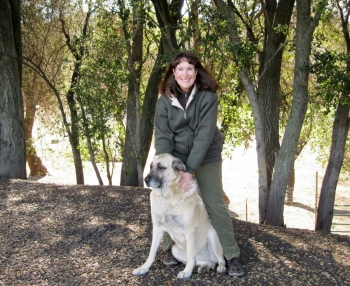 They all have their unique personalities and Alyeshmerni went about introducing me to them. The babies, Harry and Adara were a bit shy, but the protective mamas, Princess and Fanunella greeted us. Alpacas are smaller and less aggressive than llamas. Their diet consists of special pellets and hay. They also have magnificent coats and their fleece is very soft.  I saw white, black, caramel and two-toned alpacas

The alpacas at Atlas Alpacas serve several purposes. The males with good conformation, backs and legs are used as studs for breeding. Some of the animals are sold, but Kabbai inspects where they will go to. Finally, and most importantly, they sell their fleece and fiber with Amy spinning most of it herself.

In fact, Amy finds sitting at her spinning wheel and spinning the fiber into yarn to be an almost meditative experience. She sometimes sends out the fiber to be processed which includes cleaning and carding. Some of the yarn is natural and some of it is dyed, and there are yarns of different weights, such as super chunky and super fine.

Several times a year, Kabbai and Alyeshmerni host an open ranch where the public can learn about alpacas, buy yarn and other alpaca related items, relax in the fresh country air, and take in the lovely views. 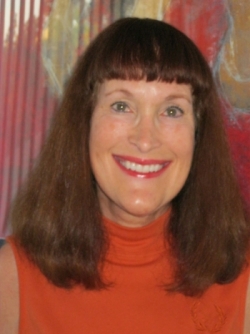