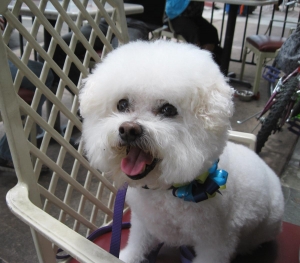 May 18, 2015 (La Mesa)--Whenever, he sees his Sherpa carrier, Marcel gets all excited. This doggie loves to travel which is good since his owner, Maggie Espinosa, happens to be a travel writer! They have gone to various parts of the United States, Mexico and France. They live in La Mesa, CA where Espinosa’s husband works as a veterinarian in his own clinic. 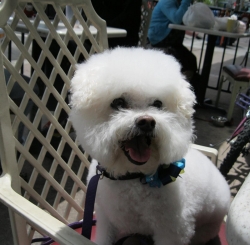 Marcel, a handsome 14 year old Bichon Frise, has been traveling since he was six. According to Espinosa, Bichon Frises were originally bred in Spain to be loyal lap dogs. Marcel fits that description, for although he is gentle, he is rather aloof with strangers, and clearly displays his devotion to his mistress.

Espinosa got Marcel as a puppy. Her dog trainer instructed her to focus on socializing him for the first six months, so she took him everywhere and exposed him to different situations and people. This proved to be good training for their future trips to various destinations. As long as he is with Espinosa, he remains calm in any situation. He even goes sailing and kayaking with her.

Espinosa also shared some tips that she believes have made him a seasoned traveler and provide good information for fellow dog owners.

Before she traveled with Marcel for the first time, she left his Sherpa carrier around the house, so he could get acclimated to it, and it became his safe zone. She also brings his dog food with her when they leave home.

When they spent a summer in Paris, she had a two month supply of Marcel’s food shipped over. She feels it is important to maintain his regular regime. She has never fed him any people food, but he does get two dog treats at each meal.

Next, she feels it is very important to bring any medications, and to make sure there is a microchip. She also has extra dog tags made up with a current cell phone number and address if possible.

Finally, she strongly recommends never leaving a dog alone in a hotel room as that can cause overwhelming anxiety. She has taken many happy trips with Marcel following the above rules, and believes they can apply to all dogs.

Besides traveling and having adventures with Marcel, Espinosa has worked with many breeds of dogs over the years. Her husband is a successful veterinarian who raises dogs for CCI.

They also foster dogs in their home, especially senior dogs until they can find good homes for them. This loving couple really is a dog’s best friend as displayed in their devotion, discipline, and affection. 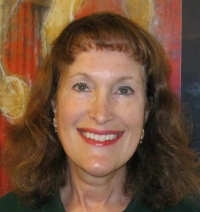 Mimi Pollack is an ESL teacher, animal lover, and a freelance writer.