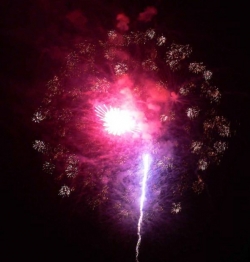 June 30, 2011 (San Diego County) -- On June 29th between the hours 8:30 a.m., and 10:00 a.m., the Sheriff's Bomb Disposal people held its annual fireworks disposal day. Local fire marshals, Burn Institute personnel, and news media were invited to the event. The yearly event reminds all of the dangers posed by using fireworks. In the East County area, the vegetation is especially dry. So that in addition to causing injuries from using fireworks, there is an additional danger due to the dryness of the vegetation.

The lure of setting off Fourth of July fireworks lands too many people in hospital emergency rooms, says a government safety agency that is urging Americans to use caution and common sense this year to avoid injuries. According to a Consumer Product Safety Commission report, three people were killed by fireworks accidents in 2010. Emergency rooms around the country treated an estimated 8,600 fireworks-related injuries in 2010.
An estimated 6,300 fireworks related injuries occurred in the month-long period before and after the nation’s birthday. Approximately 40 percent of fireworks-related injuries occurred to children under 15. Basic sparklers burn at temperatures of about 2,000 degrees – as hot as a soldering gun. ALL FIREWORKS ARE ILLEGAL THROUGHOUT SAN DIEGO COUNTY.