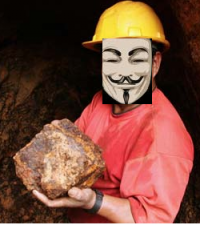 April 1, 2013 (Julian) – As ECM previously reported, an anonymous donor recently offered a  large donation to end the Julian-Cuyamaca Fire Protection District’s budget gap for this year.  Despite the generous donation, however, the fire district’s board refused to assure townspeople that it would not dissolve the district and hand over firefighting responsibilities to the County.

The board offered to settle the matter with an apple pie-eating contest: winner takes the fire district.  But the citizens refused to participate. So today, the wealthy and determined donor announced a permanent solution to aid this historic mining region.

“I’m pleased to reveal that I have purchased Julian-Cuyamaca Fire Protection District from the County of San Diego,” the donor  told ECM in an exclusive interview.  “The Supervisors drove a hard bargain, but ultimately, money talked.”

As part of the deal, Julian-Cuyamaca will retain its loyal volunteer firefighters and ambulance service.  Instead of dissolving the fire district, the new owner said he intends to dissolve the fire board and invite citizens to submit nominations for a new board to include representatives of citizens, firefighters, and tourists.

“It’s an unusual step to sell off a fire district. In fact we believe our County is the first in California, maybe the entire nation, to take such a historic money-saving action,” Supervisor Dianne Jacob told ECM.  “The purchase price—paid in cash—will go a long way toward strengthening our county’s financial ratings. These funds will enable us to build a new stadium for the Chargers, improve parks and libraries, and restore a slush fund for every Supervisor. We are also confident that the fire district’s new owner has the resources to assure strong fire protection for residents and business owners.”

Julian was founded as a mining town back in the 1800s, though the town’s Eagle Gold Mine has long ago been tapped out and closed down, except for visitor tours.

But today the town benefactor, who asked to remain anonymous, revealed the surprising source of his newfound wealth.

While excavating to add a wine cellar beneath his log home in Julian, he made an amazing discovery.

Holding up a watermelon-sized gleaming gold nugget, he exclaimed, “I found the mother lode!”