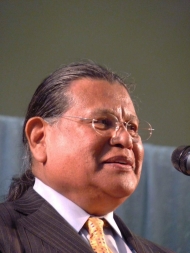 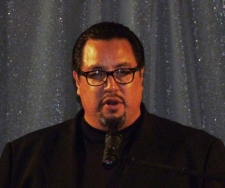 Former Chairman Bobby Barrett, who chose not to run for reelection after five terms and now serves as executive director of Viejas Community Relations, praised Pico’s past leadership as “an important part of our history.” Pico previously served three terms as chairman and two terms as vice chairman. He has been widely credited for promoting economic development of the tribe including inter-tribal business ventures and Indian gaming.

“I’m confident in our future, because we have come so far already,” Barrett. He added that while the Viejas people have needed to make sacrifices to weather the tough economic storm, “There has been some tough medicine, but in the end it will make us stronger.”

Ed Nolan, spiritual advisor, introduced Pico as a tribal member who was raised in poverty on the reservation, living in a small trailer. He later served in the military in Viet Nam before returning and attaining leadership positions in the tribal government. Nolan described Pico as “a man who is honorable” with “great dignity and great honor.” 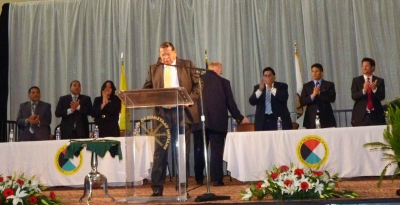 Speaker after speaker emphasized the importance of respecting cultural traditions and learning from the past, a past that for the Kumeyaay, extends back 10,000 years or more. They also pledged tribal council unity to create a vision for the future.

Newly elected Chairman Pico said he looks forward to leading his people “down a new path that is exciting and sustainable…This is about us as a people. What will we be 100 years from now?”

For thousands of years, Kumeyaay ancestors respected all of creation, he noted, but later suffered “unspeakable genocide” as well as stolen lands and broken treaties. “We were literally pushed into the rocks.”

He recalled the sacrifices made for future generations by the ancient Kumeyaay and to the original shareholders of the valley. “We owe them a great debt of gratitude, which is why we must embrace the pain and uncertainty of our future and create a place for those not yet born, those for 175 years from now, those of the seventh generation from today,” he said. “We will need courage going forth—and my experience with you in the last 20 years, courage is what you have an abundance of.”

In the 1930s, the tribe followed through on a vision for the future and bought land on the site of the current generation, including the community center where the swearing-in ceremony was held. Later, Indian gaming brought economic prosperity to the tribe—but also challenges. Now Pico says it is time for the tribe to once again create a new vision for its future.

“We have seen more changes in the last 50 years than our ancestors saw in 10,000 years,” Pico observed. Some tribal elders worried that younger Viejas members would lose their language and customs. “We were propelled forward by gaming so fast that the wheels almost fell off the race car.” 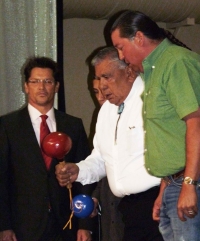 Pico believes that everything his people need stems from good governance. “Now is the time to take a closer look at our government,” he said. “We have cracks to fill and bricks to build…That’s nation building.” He told tribal members present, “I invite all of you to join in the nation building effort. I can provide guidance and leadership, along with your tribal council—but it will take an entire community to make it happen.”

Thomas Hyde, an esteemed elder, performed a ceremonial blessing with burning sage. Two other tribal members performed a traditional bird song before the swearing in by Judge Anthony Brandenburg, Chief Judge of the Intertribal Court of Southern California. The event, attended by San Diego community leaders and elected officials as well as tribal members, also included a luncheon.

Vice Chairman Robert “Cita” Welch Jr. emphasized the importance of sovereignty, the right for a tribe to govern itself, but added, “To protect our sovereignty, we must use it wisely.” He also stressed the importance of creating “a sense of hope and to push our children to receive a degree from college,” noting that education provides hope for the future. 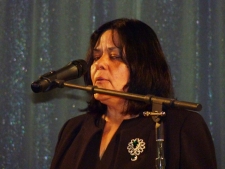 Secretary Anita R. Uqualla urged the people not to be like a silent breeze, but instead “be like the loud, strong wind that blows through here and moves things.”

Samuel Q. Brown, Treasurer, expressed gratitude to his parents and the lessons he learned growing up on the reservation. “We as a people have always been investors,” he said, praising ancestors who in the 1930s made the decision to buy 1,600 acres of land for Viejas. He likened the act to planting an acorn, knowing that the tree that grows from it will not bear fruit in a lifetime, but will provide food for future generations. He said the tribal council needs to draw on lessons from the past to “lead us again to prosperity, but that this will require a unified vision. “What will be our contribution, our oak trees, for future generations?” he asked.

Greybuck Espinoza, Councilman, agreed, and pledged to work toward “unity, discipline, and a vision we can all believe in.” 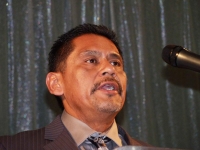 Victor Woods, Councilman, said spirituality and more use of Native language are important values. “I have turned my life around,” he said, “and I stand before you today to give back.”

Raymond “Bear” Cuero, Councilman, welcomed the audience with a traditional Kumeyaay greeting, “Howka!” Echoing the sentiments of other new leaders on the tribal council, Cuero said that tribal customs, visions, and education “are extremely important to our future.”