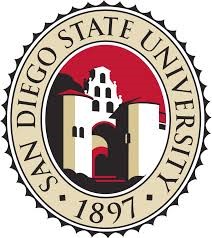 Provided by The Times of San Diego and San Diego Jewish World, both members of the San Diego Online News Association (SDONA)

September 6, 2014 (San Diego)--A person who was held by campus police after authorities found a San Diego State building marred by graffiti, including swastikas, was described by an SDSU spokeswoman on Wednesday, Sept. 3,  as a “54-year-old man from Santee who has known mental issues and was off his medication.”

“He drew with dry erase markers all kinds of symbols that were mostly illegible,” said Beth Downing Chee, SDSU media relations manager.  “He was naked when police showed up and discharged a fire extinguisher. He was transported to county mental health and no criminal charges are pending. ”

The damage was found in several rooms on the second floor of SDSU’s Education and Business Administration building late Sunday morning, August 31.

Swastikas and “illegible markings” as The Daily Aztec reported, were found in several bathrooms, while in classrooms, tables had been flipped over, while more anti-Semitic messages were left on whiteboards. One message scrawled on a whiteboard read “Death to nihilism.”

A fire extinguisher also had been discharged, according to the report, leaving the suspect’s footprints visible in the second-floor hallway. The report noted that campus facility services had been brought in to clear the graffiti and said officials with that department indicated a person was being held in connection with the vandalism.

Access to the building is limited on weekends. Classes at San Diego State started Aug. 18.