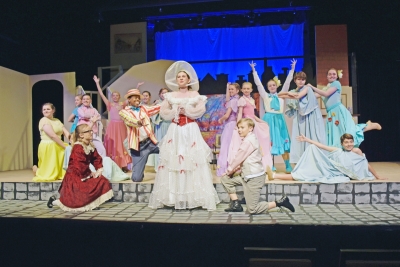 March 12, 2019 (Spring Valley) - Anything is possible if you let it happen. That’s the message that Mary Poppins provides to her charges in this whimsical, delightful adaption.  Joe Dionisio and the Young Actors' Theatre team continue to work their magic bringing us top-notch youth productions.

Everyone knows the story of Mary Poppins, the practically perfect nanny who comes to work her magic on the Banks family. Two children out of control have caused prior nannies to come and go. A wife has lost herself as she tries to be the perfect wife. Most compelling, George Banks is a dad who becomes his father, all work and no play in order to provide for his family. Live the story once more with this charming musical.

There were several stand-out performances in the show. Mary Poppins, played by Julia Swann, let her talent shine, bringing everything she had to the role. Even more impressive to me was Kinzie Pipkin as Ms. Banks. She has a pitch-perfect voice and played the role to perfection. Seth Holt brought freshness to the role of Bert, with his large family and friends in the audience to cheer him on. George Banks is perhaps the character who changes most, thus using his talent to display transformation, portrayed by Roland Meisker. Jane and Michael Banks were played by Addison Munsterman and Jackson Yakos. Kids playing other kids not an easy task. Job well done. Other stand-outs include Katie Racine as the bird lady with a beautiful rendition of "Feed the Birds."  Ezri Alvarez as Mrs. Corry and Nate Woriie as Robertson Ay both did amazing jobs. Many of the young actors played multiple roles and the entire cast nailed it. 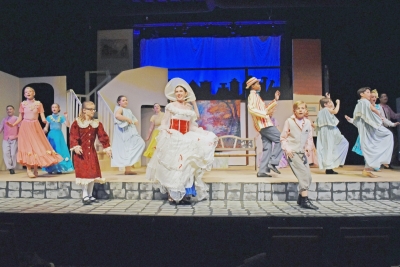 My favorites scene features the song "Supercalifragilistic." The always incredibly fast-paced number with amazing choreography from Ricardo Valenzuela ends act one. The other highlight for me is "Step in Time," the wonderful tap number with Bert and the chimney sweeps.

Betsy Alvarez recreated Mary Poppins' wonderful white dress with the red corset style waist and I loved it. The dress and hat were perfect. Mrs. Corry's outfit was also great.  The period clothing in the show set the tone. The settings were the Banks' living room and outside in the park in London.

Refresh your memories or create new ones with your children as you enjoy this fun family musical.