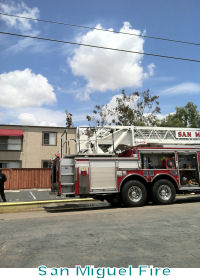 May 17, 2011 (Casa De Oro) -- A fast and effective attack allowed San Miguel firefighters to extinguish a fire that started in the kitchen of an upstairs apartment unit in the Casa De Oro area across the street from Spring Valley Middle School. Fire damage was confined to that single unit.

Crews were called to the Helix Square Apartments on the 3800 block of Conrad Drive at 11:21 a.m., Monday. The fire was considered knocked down ten minutes later. Inside the residence at the time of the fire was one adult male who evacuated the upstairs apartment, but was treated on the scene for smoke inhalation. He was later transported to Grossmont Hospital.

In order to reduce the heat and smoke San Miguel Firefighters vented the roof above the unit. This also allowed for a faster internal attack. Other residents quickly self-evacuated. No other injuries were reported.

While it appears the fire started in the kitchen area, the cause is undetermined. A dollar loss of $100,000 has been estimated for structure and contents. The primary unit suffered significant fire and smoke damage. The unit below experienced water damage.

The Red Cross has been called to assist the resident in finding temporary housing.