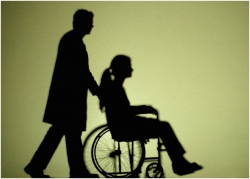 October 13, 2011 (San Diego’s East County)--The 9th Circuit Court of Appeals heard arguments yesterday in Pasadena in a lawsuit that has sweeping implications for the state budget and thousands of low-income, disabled Californians and their families.

The Developmental Services Network and other nonprofit associations filed suit to challenge a 2009 freeze in Medi-Cal funding that will harm California’s most vulnerable residents – the developmentally disabled with medical needs who live in intermediate care facilities.

A federal judge enjoined the State from implementing the freeze in May but a government appeal has permitted the State to ignore the judge's order and has forced treatment facilities in several California cities to consider closing their doors, advocates for the disabled indicate.

“The shuttering of these small health licensed facilities that are uniquely equipped to treat the developmentally and physically disabled will force patients and their families to travel great distances for treatment, will result in lost jobs in local communities and will increase costs to taxpayers in other areas,” a press release issued by the DSN states.

Among those facilities being impacted is the Home of the Guiding Hands (HGH), which serves disabled individuals in El Cajon under provisions of the Nursing Home Reform Act, a Medi-Cal program.

“In 2009, the state, without any input on cost to provide quality services, decided to freeze those rates,” Mark Klaus, executive director at HGH, told East County Magazine. In the past, facilities would submit costs, undergo an audit and the state would determine allowable rates, he added. Over the past three years, Klaus said, “We have not received over a million dollars that we would have been entitled to if those rates were not frozen. The quality of services and the access to community continue to diminish at our facilities based on the state’s devaluing of services to people with disabilities.”

The hearing took place yesterday in Courtroom 2 at the U.S. Court of Appeals in Pasadena.

According to California Healthline, Craig Cannizzo, who argued the case on behalf of disabled people, the case has far-reaching implications because the state did not get permission from CMS for the rate freeze. Cannizzo said justices on the three-judge panel accused the state of end-running the system.

A decision could take months, however, if judges believe there may be irreparable harm from the rate freeze, then they have a duty to rule more quickly, Cannizzo observed.