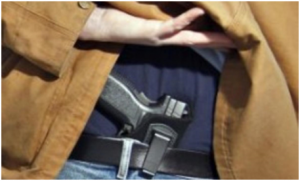 Today, the Ninth Circuit Court of Appeals, issued a decision in the case of Peruta v. County of San Diego, et al.

This case involved applicants who were denied licenses to obtain concealed carry permits. The applicants were denied for failing to establish "good cause," as required under California law. The applicants sued alleging that the "good cause" requirement violated their Second Amendment rights. The matter was eventually argued before an en banc panel of the Ninth Circuit Court of Appeals.

In support of its decision, the Ninth Circuit relied upon a decision of the U.S. Supreme Court. The Ninth Circuit concluded that "[b]ecause the Second Amendment does not protect in any degree the right to carry concealed firearms in public, any prohibition or restriction a state may choose to impose on concealed carry – including a requirement of 'good cause,' however defined – is necessarily allowed by the Amendment."

The Ninth Circuit left open the issue of whether California's prohibition on open carry may violate the Second Amendment by stating that "[t]here may or may not be a Second Amendment right for a member of the general public to carry a firearm openly in public."

Sheriff Gore issued the following statement:  “Sheriff Gore has consistently stated that it is the function of the Legislature to make the laws, the courts to interpret the laws, and law enforcement's role to enforce the laws, regardless of their personal beliefs or biases. Throughout this legal process, Sheriff Gore has been committed to allowing the process to conclude so that clear guidance would be provided. “

The Sheriff adds, “Based on today's decision, the procedure of obtaining a license to carry a concealed weapon within the County of San Diego will continue as it has since the 1980s. As always, anyone who believes that they may have circumstances which place them in harm's way, and necessitate the ability to carry a concealed firearm, can apply for a license with the Sheriff's Licensing Division. Good cause is evaluated on an individual basis.”

Instructions for applying for a concealed carry license can be found at http://sdsheriff.net/licensing/ccw.html.

So the Sheriff reminds us of the various roles assigned to our government's branches and then proceeds to assume the role of "sole interpreter" with regard to whether or not any individual has a bona fide reason for wanting to conceal a weapon. The sheriff becomes 'judge and jury' on this issue. I don't believe that this was part of his original job description - I believe it represents an add-on. There is no mystery in the Ninth Circuit's decision to deny this basic right, the courts seldom operate to check executive powers. They're part of the problem and there is no "separation of powers". All three branches of government operate as one unit, reinforcing the government's stranglehold on our rights, more of which disappear with each passing day. Our militarized police departments get more military-style weaponry routinely, while they shake in their boots when thinking about an armed public, a public they dare not approach without bullet-proof vest and increasingly, with drawn weapons, creating a most unhealthy "We" versus They" atmosphere. "Protect and Serve" as a motto is a total farce, given the mindset of most cops as well as the ongoing record, these do little to convince the public. If the people react as if they're in a 'police state' it might just be because they are. Somewhere between thoroughly 'militarized' PDs and an armed public there has to be some sensible compromise; as it now stands, the public is the oppressed and the PDs are the oppressors. If an armed public is a fearful contemplation for the PDs, it shouldn't take much imagination to understand that the same fear obtains when the public views our thoroughly militarized PDs. If this is not a 'police state' then we shouldn't tolerate militarized PDs of any kind including Sheriff's Departments or any other of our too numerous police agencies.