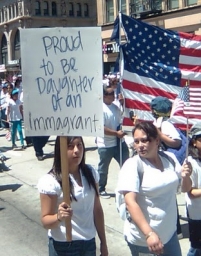 November 10, 2015 (Washington D.C.) – The Obama administration is appealing to the U.S. Supreme Court to protect immigrant families after a 5th circuit appellate court decision blocked implementation of the President’s Deferred Action for Parents of Americans, or DACA.  The president’s executive order would grant work permits to up to 5 million immigrants and protect most from deportation.

The appeals court, by a 2 to 1 vote, upheld a previous ruling by a lower court.

The U.S. Justice Department has issued a stating affirming its commitment to prioritize removal of the worst offenders, but not “people who have ties to the United States and who are raising American children,” Justice Department Patrick Rodenbush has stated.

But even if the high court upholds the President’s use of executive power, should a Republican candidate win the presidency and take office in 2017, the order could be reversed, leaving millions of immigrant parents living in fear of deportation, even if their children were born here and are U.S. citizens.

Pedro Rios, Chair of the San Diego Immigrant Rights Consortium and Director of the American Friends Service Committee - US/Mexico Border Program, issued a statement that read in part, "Though disappointed, our broad coalition of civic, faith, labor and legal organizations, remain confident that ultimately we will win this lawsuit, and finally, millions of hardworking immigrants will be able to live, work and stay in the only country they call home. In the meantime, we will continue to organize and fight for immigrant rights, and we urge the Department of Justice to appeal to the Supreme Court."

Rios noted that despite the slow movement of the anti-immigrant lawsuit through the court system, support for immigrant families and the deferred action programs has continued to grow.  The cities of Chula Vista, Lemon Grove and San Diego all unanimously passed resolutions in support of expanded DACA and DAPA.  The fate of the programs now lies with whether or not the Supreme Court decides to hear the case.

"The U.S. Justice Department has issued a stating affirming its commitment to prioritize removal of the worst offenders...." Is this the same DOJ that permits Sanctuary Cities to exist? The "worst offenders" hide in plain view in these cities! Let's be clear, this issue is about one thing and one thing only....Democrats see Latinos, and illegals, as voters who will support them and they will do ANYTHING to keep them, even at the expense of citizens. It's time that the Democrats "go down with the ship" of traitorous behavior.

first of all the mass deportations you try to envision will not happen. if families need to be broken up that is the fault of the illegal aliens, not the citizens or the law. illegal aliens are just that and do not belong here. ALL countries have a right and obligation to the citizens to protect and defend the border. try reading the Constitution. nothing will shut down and agriculture will continue as always. the only accurate thing you said is there are jobs many people won't do.

should we read? Please advise.
to bring the US economy to its knees. The deportation of millions of people who do the work that Americans won't do, plus many of their families joining them, besides the social turmoil, would severely stress many businesses and even cause them to shut down operations while affecting many local economies. This includes agriculture and hospitality businesses especially, but also many other business categories. This wrongful policy, a form of American Exceptionalism, has a lot of support, and it simply illustrates how mean many people can be to others less fortunate then themselves because they are special, don't you know.