The July 25th decision held that San Diego County officials acted wrongly when they approved a map for a housing subdivision  on the 1,400-acre Hoskings Ranch near Julian. The court found the Genesee Properties project would have set the stage to replace ranching with residential development--all while allowing the property owner to enjoy tax breaks intended to keep the land in agriculture.

“This decision is an important victory in the long effort to protect San Diego County’s agricultural land and open space from sprawling development,” said Cleveland National Forest Foundation Director Duncan McFetridge. “Over the years, the county has repeatedly sided with developers to promote growth in our fragile forests and ranchlands. This decision is a clear rebuke to the county’s approach.”

At issue in this case was the County’s interpretation of state law designed to protect agricultural lands from development and to support agriculture as a financially viable land use. Under the Williamson Act, agricultural landowners can enter into a contract with the county to reduce the landowner’s property tax burden 25-70% in exchange for a commitment to maintaining agricultural uses on the land for at least the next 10 years. The contracts renew perpetually unless a landowner indicates that they would like to leave the agreement.

The companion Subdivision Map Act sets the terms under which land under a Williamson Act contract can be divided into parcels and sold for development. Specifically, it requires that subdividing Williamson Act land must "not result in residential development not incidental to the commercial agricultural use of the land." The court found that San Diego County’s approval of the plan to allow Genesee Properties to subdivide Hoskings Ranch into 40-acre ranchettes violated the Map Act. 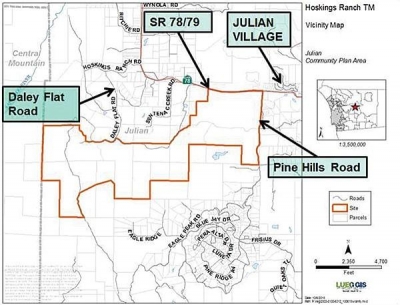 The court’s decision noted, “The practical effect of the tentative map [for the Hoskings Ranch subdivision] is to permit Genesee to prepare its land for future residential development that is not tied to the commercial agricultural use, while still giving it the preferential tax treatment for owners who are supposed to be engaged in purely agricultural or compatible uses.” The court also found that, “…if residential development proposed by a tentative map has no relation to or is unnecessary for the commercial agricultural use, the law mandates that the local body deny tentative map approval.”

The residential use proposed for Hoskings Ranch, the court found, lacked the required relationship to agriculture, making the subdivision illegal.

The County Board of Supervisors must now vacate its approval of the tentative map for the proposed Hoskings Ranch subdivision, which will prevent the project from moving forward.

Asked to comment on the decision and whether the County plans to appeal the decision, County spokesperson Jessica Statement replied that the “county does not comment on pending litigation.”

The appellate court’s published decision means that its finding in this case may be cited in future court cases with similar facts. Local governments across the state must also now follow the court’s ruling when evaluating proposed subdivisions of land under Williamson Act contract.

“This decision sends a signal to jurisdictions throughout California that they must comply with state laws designed to keep agricultural land in agricultural use,” noted attorney Gabriel Ross of Shute, Mihaly & Weinberger LLP, who represented Cleveland National Forest Foundation in the case.

McFetridge concurs. “This is really important as a published decision because it sets a precedence for other cases in California on Williamson Act lands which cover  hundreds of thousands of acres of farm and open space land.”

Land use advocates have been pressing San Diego County to protect its agricultural preserve lands from subdivision and sprawl-style development for more than 20 years. Groups like the Cleveland National Forest Foundation and Save Our Forests and Ranchlands (SOFAR) pushed the county to establish rules for the primary use and lot size on 200,000 acres of agricultural preserve lands that would protect these lands from development due to their significant cultural and ecological value.

At one point, the county’s actions were so egregious that the court declared a temporary moratorium on development proposals on any of the county’s agricultural preserve lands and granted SOFAR land use authority over these lands.

The Hoskings ranch subdivision was first proposed by Genesee Properties of Colorado on what the San Diego Reader described as “untouched wilderness” less than a mile west of downtown Julian back in 2003. Genesee’s owner, billionaire Linden Blue, is co-owner of General Atomic, a defense contractor and manufacturer of Predator drones.

The California Department of Conservation sent the county planning commission a warning letter in 2016 that approval of the project would violate the Williamson Act and Subdivision Map. Commissioners ignored the warning and approved the project anyway.

Genesee could have paid a cancellation fee to remove the property from the Williamson Act legally and swiftly, or phase it out over ten years with a gradual reduction in tax subsidies. Instead it did neither.  It scaled down the project and agreed to set aside a contiguous easement for commercial agricultural use, even bringing in a herd of cattle to graze and breed.

Despite another warning from the state that this still violated the law, Supervisors approved the project for Genesee to both build on the land and continue pocketing the tax breaks meant for purely agricultural use.

Julian residents, upset to learn, of the project organized an action committee which argued that the county was giving preferential treatment to a big-bucks developer. The Julian Action Committee urged the Julian Planning Group, which had approved the project in 2015, to reconsider.  Jeffrey Chine, attorney for Genesee Properties, fired an intimidating letter to the planning group warning that its volunteer planners could be sued individually and stripped of indemnification protections by the county if it reconsidered the project.

Brian Kramer, a member of the Julian Action Committee, has property that overlooks Genesee’s 1,416 acres.

“The first I really knew about it was ten days before the planning commission hearing. There was considerable outrage from Julian residents after discovering how far this project had gotten with almost a complete absence of noticing.,” Kramer told the Reader. “A billionaire will continue to receive tax breaks and be able to get that much more profit by promising prospective owners nominal property tax bills while our small community struggles to provide public safety and public works services to them.”

County planners wrangled with demand for housing vs. the desire for open space.

County Planner Michael Beck praised the project for having large lot sizes and 85 percent open space, despite its apparent conflict with state law.

In 2016, Cleveland National Forest Foundation asked the County to deny the permits, but Supervisors approved the project soon after, disregarding the looming prospect of litigation.

In recent years, Cleveland National Forest Foundation, Sierra Club, Save Our Forests and Ranch Lands and other environmental groups have won multiple lawsuits against San Diego County government over other actions including transportation and climate change plans as well as other sprawling developments.

This latest decision to protect agricultural lands from development is yet another clear rebuke of San Diego County’s approach to land use planning, and a reminder that the county must adhere to state land use laws.