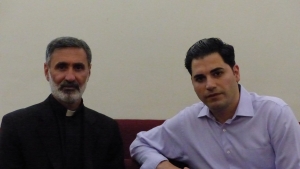 "Father Noel is amazing in the halls of Congress. We were able to get 20,000 more visas for Chaldeans to come here. For his success, he is being punished.  The church is saying that no Iraqi Christians should leave Iraq..Wewlil not allow himto be sent like a cow to slaughter.”--Mark Arabo

July 12, 2016 (El Cajon)-- Friday is the deadline for Father Noel Gorgis to leave the St. Peter Chaldean Catholic diocese, under an order signed by interim Bishop  ShlemunWarduni and Patriarch Mar Louis Sako. Pope Francis previously intervened to overturn an order for Father Noel to be transferred to Iraq, after local Chaldeans made clear he is needed here, and that his life would be in jeopardy in Iraq.  The new order seeks to punish Father Noel for disobeying the Patriarch despite the Pope's wishes that he remain serving his parish here.

Now Mark Arabo, founder of the Minority Humanitarian Foundation and a prominent spokesman for Chaldean-Americans, is joning with other parishioners here to defend Father Noel.

""Our Holy Father supports Father Noel...We will not allow him to be sent like a cow to slaughter," Arabo stated in an interview yesterday, referencing the earlier effort to deport Father Noel to Iraq, where ISIS has slaughtered priests.

Arabo said Father Noel has been a successful advocate for Chaldean refugees seeking to come to the U.S.  “Father Noel has joined us on multiple trips to Washington D.C., meeting with members of Congress and the United Nations, advocating for visas…Father Noel is amazing in the halls of Congress. We were able to get 20,000 more visas for Chaldeans to come here. For his success, he is being punished.  The church is saying that no Iraqi Christians should leave Iraq.” He likened the situation to the Holocaust, when some Jews argued against leaving Europe—and were ultimately killed.

He noted that Father Noel’s own sister is currently displaced in Northern Iraq, seeking escape to come to  America. Many other refugees who have escaped Iraq are languishing in refugee camps in other countries, in a legal limbo.  Father Noel, with 25 years in the U.S. and many national connections, is best suited to advocate for these refugees, Arabo believes.

“We are appealing to Pope Francis.  We are hoping Pope Francis will come in forcefully and say he will stay,” Arabo said.  He believes the issue is political, with church leadership in Iraq fearful of losing control.

He believes the best hope for freedom for  Christians left in Iraq is to come here to America.  “You can’t speak Aramaic in Iraq. They will kill you.  We built a seminary here, and a convent. We’ve built 14 churches, and a monastery.”  Meanwhile in Iraq, the Patriarch recently ordered Chaldeans to fast during the Muslim holiday of Ramadan. “They are losing their identity.”

Before ISIS, there were 1.6 million Chaldeans in Iraq; today there may be fewer than 200,000 left, according to Arabo.

He wants to see Father Noel forgiven and allowed to stay to serve people here, “in this year of mercy.  Father Noel never did anything wrong,”he says. By contrast, Arabo says another Chaldean priest in Canada gambled away funds raised for refugees, but was allowed by the Patriarch to remain a priest  provided he underwent counseling.

Many members of St. Peter have reached out to our publication to voice concern over Father Noel being banished, all but one opposed to the decision.  But some are fearful to speak out publicly for fear of retribution or excommunication.

Arabo says,”I would not be able to sleep at night when there is injustice if I did not speak out…The church is guided by the Holy Spirit.  There are hundreds, maybe thousands of people in our community who have said’Wherever Father Noel goes to do mass, I will go.’  If we had a mass on San Diego Bay,thousands would come.  The vast majority love Father Noel.”

He suggests if the decision is not rescinded, it could lead to a split in the church itself. “That is exactly what Jesus did in the temple—a place to pray became a place of corruption, so he said, `Destroy it.’”

There is more at stake than preserving the Chaldean religion, he added.”This is also about the right of Chladeans to preserved our culture, our language, our theology.”  “I’ve spoken to the leaders of the Church in Baghdad and told them we need reconciliation.”

As for Father Noel, he assures he will not leave the priesthood. “I am a father forever,”he said.  But he is anguished over being ordered to leave St.Peter, where he ministers to some 50,000 Iraqi Chaldeans in El Cajon.

“I cannot practice my religion freely in Iraq,” he says of his decision to leave 25 years ago and it has only become worse since then. “There isno more hope for the Christians, theChladeans in Iraq…Here in the U.S. we can preserve our language, our culture, our religion.

He believes ordering him to leave the diocese here ignores “voices coming from Iraq asking us to help them come to the U.S. I have been hearing those voices,to help themg et out of Iraq.”

Come Friday, if the order is not changed, FatherNoel says he will obey and leave St. Peter after evening prayers.

What options does that leave?

Potentially going to another Catholic church, not Chaldean.  But Father Noel says,  “I was born in the Chaldean church. I will continue to serve my Chaldean people,” he says, though it is unclear exactly how that can be accomplished, since he will be barred formally from conducting mass or other ceremonies such as weddings in any Chaldean church.

Some have spoken in secret about possibly holding mass in homes or borrowing space in another church, even if not officially sanctioned. There has even been talk of forming a new reform Chaldean church not beholden to Baghdad.

Father Noel reflects that the Patriarch “is not God” and that ultimately, a priest must be answerable to God. He plans an appeal to the Pope, he confirms.

Come Friday, he says, “I will obey—and then I will fight.”