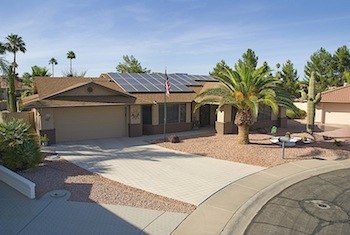 November 27, 2013 – In the wake of a widening misinformation scandal in Arizona, the Alliance for Solar Choice (TASC) is calling on utility trade organization Edison Electric Institute (EEI), “… to disavow APS’ underhanded behavior and state whether or not they have also used dark money.”

EEI represents all U.S. investor-owned electric companies and is running television and radio ads that attack rooftop solar in Arizona.

This comes on the heels of a revelation that the state’s utility company, the Arizona Public Service Co (APS), may have spent at least $9 million of ratepayer funds on anti-solar and anti-retail competition campaigns.

Arizona Corporation Commissioner Robert Burns has requested an investigation into this matter.

Burns wrote that he is “troubled by the magnitude and cost” of these public relations campaigns and concerned that APS might be using rate payer money. He asked for the total cost, including monies spent through the use of salaried staff and lobbyists, and whether APS expected rate payers to fund this.

According to a series of revelations in the Arizona Republic, in 2009 Jessica Pacheco, and Barry Murray approached APS with a plan to use false information against their perceived enemies. Pacheo is now the company’s head lobbyist and Miller has been employed as a consultant.

Though Pacheo, Murray and APS have all distanced themselves from the plan, Bryan Miller, the Vice President of Public Policy & Power Markets at Sunrun, says, “APS is clearly executing the plan that Pacheco and Murray brought forward in 2009.”

After months of denying any connection, APS recently informed the Arizona Republic that “it provided money to a Washington, D.C. based conservative organization called 60 Plus, which focuses on seniors’ issues such as taxes, Social Security and Medicare. It also gave money to another non-profit called Prosper, which was launched this year by Republican Kirk Adams, a former Arizona House speaker.

“The non-profits have supported APS’ position in websites, online videos and television advertisements.”

One 60-Plus ad that ran in Arizona stated, “Connected companies getting corporate welfare. Now California’s new Solyndras, SunRun and SolarCity, are getting rich off hard-working Arizonans.”

The Republic also reported that, “John Hatfield, APS vice president of communications, said the utility is contributing money to the non-profits, and potentially other groups, through political consultant Sean Noble and his firm, DC London.

Noble is better known for having handled millions of dollars, put up by the Koch brothers, in a publicity campaign designed to unseat President Obama during the 2012 election.

“APS lied to regulators and the public for months,” said Bryan Miller, co-Chair of TASC and Vice President of Public Policy and Power Markets for Sunrun. “EEI should give a firm ‘yes’ or ‘no’ on their own use of dark money, and whether or not they endorse APS’ tactics.”

Miller believes that, “APS is executing on EEI’s national playbook.”

On page 4 of the report Disruptive Challenges: Financial Implications and Strategic Responses to a Changing Retail Electric Business, which is published by EEI, distributed energy sources (which include net metering) are identified as “the largest near-term threat to the utility model.”

On page 13 it states, “Once the sustainability of the utility earnings model is questioned, investors will look at the industry through a new lens, and the view from this lens will be adverse to all stakeholders, including investors and customers. While we do not know the degree to which customer participation in DER and behavior change will impact utility earnings growth, the potential impact, based upon DER trends, is considerable (as stated earlier, industry projections propose that 33 percent of the market will be in the money for DER by 2017, assuming current tax and regulatory policies).”

The report also called for “prompt action” to protect investor interests (p 18), but the nature of these actions was not clearly spelled out.

In a statement released yesterday, the Alliance for Solar Choice stated that “APS is trying to eliminate net metering because they – and other utilities – see rooftop solar as a threat to their monopoly. In place in 43 states, net metering gives solar customers fair credit for the excess electricity they send to the grid for the utility to sell to other customers. Studies in states including Arizona, California, Colorado, and Vermont have shown that net-metered rooftop solar delivers a benefit to all utility ratepayers, solar and non-solar alike.”

Stephanie Donovan, a spokesperson for San Diego Gas & Electric, says this characterization of utilities companies being against rooftop solar is wrong.

“Far from fighting solar, SDG&E is committed to local solar power generation and offering our customers new green solutions tailored to their needs.  As of Oct. 31, 2013, a total of nearly 29,200 SDG&E customers have rooftop solar. We also believe solar power should be affordable and easily available to any customer who wants it, regardless of the location of their home or whether they own or rent.”

She pointed to SDG&E’s recent collaboration  with other California utilities, legislators, the Governor’s office, the solar industry and consumer groups – including AARP, TURN, the CPUC’s Office of Ratepayer Advocates and the Greenlining Institute – on AB 327, the rate reform legislation that protects NEM and guarantees the grandfathering of current rooftop solar customers with a reasonable period to recoup their investment.

“The utility industry is in the midst of an exciting transformation,” she said. “Driven by energy and environmental policy initiatives and the desires of our customers, utilities are becoming energy “networks” that connect infrastructure, technology and customer service in more intelligent and useful ways than ever before.  However, the current tiered structure for electric rates for the California IOUs is out-of-date and doesn’t reflect the way many consumers use energy today.  As a result, to support this future, we must revise our pricing and billing to ensure that all utility customers are charged fairly and appropriately for the energy and utility services they use.”

“Rooftop solar is only one type of distributed generation, which, in the future, could include fuel cells, mini wind turbines, battery storage, and even EV batteries. It’s imperative that we put in place electric rates that will ensure that solar, and all forms of DG, are sustainable in the long term.  If we don’t, we will face the same economic crisis Europe faces today, which has prompted a retreat from renewable development rather than a desire to embrace more.”