Residents are asked not to harm bears; hunting bears is illegal in San Diego County

Today’s reported sightings of a bear in Kearny Mesa raise an intriguing question: are black bears back in San Diego County?   In 1999 and 2000, a dozen black bear sightings were reported  in Cuyamaca, Julian, Ramona, Palomar Mountain and other mountain areas. But none had been seen in the past 13 years—until now.

This February, a Border Patrol night-vision camera caught a surprising sight: a bear crossing a roadway between the In-Ko-Pah and Mountain Springs Road near the Imperial Valley and San Diego County line, U-T San Diego reported.  ECM received a report of possible bear tracks in the southeast portion of the county last year.

Then today, multiple witnesses reporting seeing a bear in the Kearny Mesa area of San Diego.  A city Enviornmental Services employee claimed to see the bear out the window of the Sheriff’s department south of Balboa Avenue and west of I-15.  She summoned others, including an Idaho man familiar with bears, who said the large brown animal was indeed a bear.

A search for the bear via air and on land yielded no signs of the animal, according to the California Department of Fish and Game.  Richard Burg with the DFG spokesman told ECM news partner 10 News that the bear likely came in from East County and followed the San Diego River, hiding in thickets, then making its way up through canyons.  Alternatively, he suggested, “he may have came up through the canyons, or he may have gotten off of Mission Trails Park and from there gone over to Miramar and made his way over this way."

Grizzly bears, California’s state symbol, once roamed San Diego County but have been extinct in the state since the late 1800s.   Black bears have never been native to San Diego County.

Most likely, some of those bears crossed over or under I-10, perhaps in culverts, to reach northern San Diego County.  In 1999 and 2000 a dozen sightings were reported.  These included a bear and two cubs seen at the La Jolla Indian Reservation, Vulcan Mountain in Julian, and in Cuyamaca Rancho State Park. Two bears were seen on Palomar Mountain ( one confirmed with a photo), near  Lake Henshaw and the San Luis Rey picnic and in Ramona.

A bear actually took up residence at Heise Park in Julian in 1999.

In 2000, David Benson shot and killed a 200-pound male bear that he claimed was threatening livestock at his home in Ballena Valley, nine miles east of Ramona.

Black bears, unlike grizzlies, rarely harm humans unless they are attacked or directly provoked, such as if a mother bear believes her cubs are threatened. 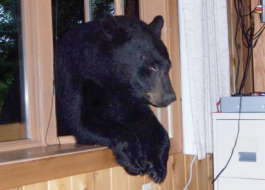 fallen fruit on the ground. Keep barecue grills clean. Don't store food in your garage or outside.

If you should encounter a bear in your yard,  back away slowly. Making noise, such as banging pots and pans together, may scare it away.  If you find a bear inside your home, leave immediately and call 911. Do not block exits.

In many parts of the country, people live in areas inhabited by bears, though the large animals are not often seen and rarely cause problems for residents.

Never feed bears, since this leads them to develop habits that could lead to their destruction.  Bears that lose their fear of humans may become emboldened, resulting in them being taken into captivity or more often, killed.