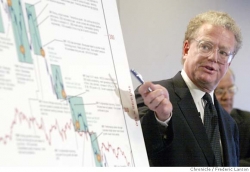 In a discussion titled “There Goes Our Retirement,” he will speak Wednesday, May 4 at 6:30 p.m. during a meeting of the La Mesa-Foothills Democratic Club at the La Mesa Community Center, 4975 Memorial Drive in La Mesa. The event is free and open to the public regardless of political affiliation. 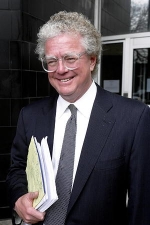 Lerach has seen his own share of controversy. He pled guilty in 2007 to one count of conspiracy after the government charged that he and partners at his former firm paid incentives for lead plaintiffs to file class action lawsuits in a small fraction of the cases that they handled. His career was chronicled in the best-selling book, Circle of Greed by Patrick Dillon and Carl Cannon.

“The practice of sharing a part of the legal fees with the class representatives in successful class-action lawsuits predated my entry into that field. But we were wrong to think the ends justified the means,” he said in a Union-Tribune interview after his release following nearly two years in prison. The La Jolla resident added, “Even though bad practices may have been engaged in, the lawsuits themselves were meritorious and on behalf of real victims.”

In his heydey, he was so effective at recovering funds from corporate powers that companies feared being "Lerached" by his relentless deluge of document requests and paperwork. Lerach affirmed that he is “proud of the work we did representing people who were taken advantage of by rich and powerful interests. We recovered substantial sums for these people and, more importantly, gave them a sense that someone in the legal system cared about them. We demonstrated to very powerful interests that there were lawyers in the system who would stand up to them and call them to account.”

He has also represented Holocaust victims, victims of slave-labor conditions in the U.S. Mariana Islands and workers who believed their rights to organize were violated.

Following the banking and mortgage collapses that led to the worst recession since the great Depression, Lerach is now hitting the lecture circuit speaking to attorney groups, community organizations, and corporate governance seminars to warn of what he predicts will be the next major financial crisis: collapse of America’s public and private pensions due to Wall Street powers involved in a debacle to take the hard-earned money of U.S. retirees.

Well, retirement funds are not safe anymore, because of this economy. If you want to save the most money without worrying, just get your money, put it in a box, and bury it in your backyard.