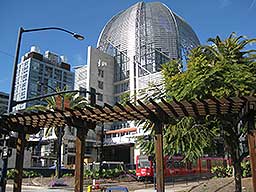 February 19, 2014 (San Diego) - A library would seem to be a safe haven for both children and adults who are looking for a quiet oasis to escape the crime and commercialism on the streets, to find refuge in a great read or to complete a project.

But a recent 10 News report exposed the presence of sexual predators, some committing lewd acts, at San Diego’s downtown library.  Is this problem occurring also in East County libraries?  East County Magazine talked to a county library representative, who shared insights into safety considerations in branch libraries in the unincorporated areas.

Dan Haggerty of San Diego 10 News reported, “Murder, assaults, lewd acts and sexual predators are in and around the brand new Central Library in downtown San Diego, and Team 10 has uncovered documents and security images showing all of it.”

The new $185 million facility is used by thousands of people every week, including students. According to 10 News,  the contracted security company, G4S, staffed no more than four security guards in the nine-story building, which measures half the size of Qualcomm Stadium. None of the guards were armed, not even with pepper spray.

Sources showed Team 10 surveillance footage of sexual offender Gregory Carroll being escorted out of the library after he was found in the Teen Center. According to the Megan's Law website, Carroll was convicted of rape by force or threat with a child under 14 years old. He's also listed as a transient.

According to 10 News, incident reports revealed disturbing incidents including crimes. In one case, security snapped shots of a man fleeing the scene after a woman in the computer lab said that he unzipped his pants and exposed his genitals. 10 News also reported that several people have been found viewing pornography, though the library disputes this point.

In another incident, security spotted a man carrying a hatchet in the computer lab  but he disappeared before guards could question him.. Fights are significant issues, 10 News indicated, citing  reports detailing verbal and physical altercations and video footage of two men chasing each other and fighting in the streets outside.

The library is located across the street from a homeless encampment. Several reports detail transients verbally harassing patrons and security. Patrons have reported finding people sleeping in hallways, computer labs and bathrooms. In one case, security filed photos of a bathroom stall covered in blood.

In November, a transient was murdered near the library's front doors. San Diego police said a man was bludgeoned to death during library hours; the crime remains unsolved.

Interim Mayor Todd Gloria said police now plan to beef up patrols in the area. Detective Gary Hassen of the San Diego Police Department downtown said that armed guards have now been put in place, but wouldn’t provide any specifics, fearing that they could expose police strategy.

East County has its own challenges with libraries, as homeless people and ex-convicts have rights too, including the right to use, but not abuse the library.  To protect children from being exposed to pornography, the County Library system says that it now has filters on all library computers.

East County Magazine interviewed Count Library Deputy Director Donna Ohr regarding the 33 branches in the County’s unincorporated areas.  She told us that no felonies have been committed in the branch libraries to her knowledge.

Ohr said that the branch libraries that she is in charge of take a community approach involving  the Sheriff ‘s  department, Health and Human Services personnel, mental health professionals, religious leaders, and social work interns from SDSU, all who monitor the library on a regular basis to care for the homeless population and other patrons who might be in trouble and to watch for crimes or dangerous activity.  Guards and staff also help watch out for suspicious characters.

Branch libraries are designed to have the children’s section in the back, so that the staff can patrol the area, though the front would be widely visible  (albeit closer to exits

Ohr believes that even with the Internet at almost everyone's fingertips, libraries are still an essential social part of society.  Citizenship classes, preschool tutors and many other services can only currently be found at the library, not online.

“A library is a sanctuary and we do our best to insure that,” she said. “Libraries inform, educate, entertain and inspire as a people’s university.”

But she acknowledged, sometimes there are tensions.  Adding to the challenge of the safety situation, libraries are open to the public, including the homeless, and ex-convicts who use the library as a refuge and possibly to train for a career and better themselves.  Although most are not disruptive, Ohr indicated there have been a few agitated customers reported by staff.

Sheriff  Media Director Jan Caldwell said she would do some research and get back to us, but has not responded by press deadline.

The director of the downtown  library,  Deborah L. Barrow, sent an email stating “If there is a violation of the rules, depending on the severity patrons may be asked to leave, temporarily suspended, permanently banned from the Library, or police called to arrest the person.

Since library staff and guards do not tolerate bad behavior and work diligently to address issues as they arise, incident reports are generated when situations warrant reporting. This include issues such as those addressed in the Channel 10 story. However, Barrow disputes some points raised by 10 News, which critics contend was sensationalized.

The station’s report indicated that pornography has been accessed at the downtown library, but Barrow said filters prevent such access, though some patrons might learn to disable filters or filters may not block every site.

In addition, Barrow sought to assure patrons that the library has  private security on site 24/7 and custodian staff present until midnight.  Library staff regularly meet with police and work closely with them to address any behavioral security related issues. Library and San Diego Police are increasing the uniformed police presence in the building and the Library is providing them a work area, she added.  In addition, the library has  onsite professional mental health services ( the New Chapter Support Center staffed by Mental Health Systems).

The City of San Diego continually looks for opportunities for improvement.  According to Barrow, the Library will continue to work with members of the public, security personnel, City leaders, and the San Diego Police Department to ensure our facility is safe and well-maintained.” Perhaps having a new mayor now will make a difference.

However, no matter what safety precautions the library takes, Ohr strongly emphasized that it really is the parents responsibility to keep them safe, and children should never be left unattended anywhere, not just at the library.

Since most teenagers like to be independent in the library, if these crimes reported by 10 news spread to East County libraries, this could be a challenge.  As of this writing though, Ohr stated no violent acts or crimes involving sexual predators have occurred  in East County branches-- and that the Library Journal recently named San Diego County libraries, the library of the year.

Jordan Schaffner is a San Diego writer and real estate agent. his novel,”Naked Skydiving” is available on barnesandnobles.com and Amazon.com.  He can be reached at youtopiamedia@gmail.com. 619-346-9433