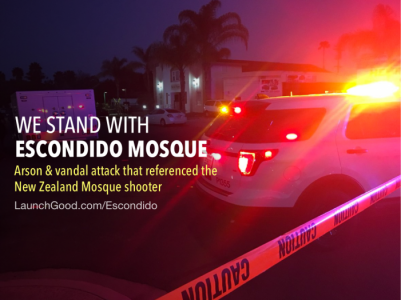 Image: Funds are being raised through LaunchGood to restore damage at the mosque.

March 26, 2019 (Escondido) – An arson fire at the Dar-ul-Arqam Mosque in Escondido on Sunday has prompted heightened security at mosques throughout San Diego County, the Escondido Grapevine reports.

“Graffiti left behind by the suspect made reference to the shooting incident in New Zealand,” said Lt. Chris Lick with Escondido Police. The mass shooting at a Christchurch New Zealand mosque earlier this month killed 50 people.

A caller reporter the early morning fire at the Escondido worship center, which was put out with a fire extinguisher.  Fortunately no one was injured, although several people were inside engaged in religious activities at the time.

The fire scorched a wall and caused smoke damage, temporarily cancelling services. A fund to repair damage has been established at LaunchGood.

Lick said the fire is being investigated as both hate crime and arson.  Federal and county law enforcement officers are investigating.

A prayer vigil Sunday night drew an outpouring of support from community members. Civil rights organizations including the American Civil Liberties Union have denounced the crime. Religious leaders and elected officials have also spoken out in support of Muslims targeted in the blaze.

50th Congressional district candidate Ammar Campa-Najjar,attended the vigil and issued a statement which reads in part, “"As a Christian, and as an ally of the Muslim community, I joined Escondido’s interfaith community in solidarity. We encircled a mosque with love after it was was vandalized and nearly burned down. Thank you to the law enforcement officials who stood in solidarity and pledged to keep this community safe."

He criticized his opponent, Rep. Duncan D. Hunter, stating, “This happened in Congressman Hunter’s district – will he condemn those who did this? Wil he stand in solidarity with the victims?” “

Hunter spokesman Michael Harrison sent the following statement today in response to an ECM inquiry, which he indicated has been sent previously to other media that contacted him for comments on the incident. “Congressman Hunter condemns any acts of violence and appreciates and supports our law enforcement community in their investigation. Anybody found participating in these crimes should be prosecuted to the fullest extent of the law.”  Harrison added that the Congressman does not issue statements or take action based on the "narrative" of political opponents.

Dustin Craun, leader of the Council of American-Islamic Relations in San Diego, has condemned the attack and asked anyone with information on the crime to contact Escondido Police, adding, “We stand in solidarity with our community members who attend the Islamic Center of Escondido.”