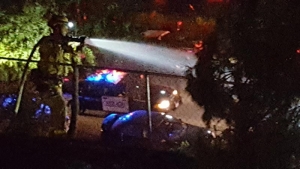 December 10, 2017 (El Cajon) – A witness reported seeing a thin, white male wearing a red hoody light a fire intentionally on a hillside near Fletcher Hills Presbyterian Church on Thursday night, then take off running. The suspect remains at large.

Jim Hancock, a church elder who lives at the base of the hill, says he ran up with keys in case the fire department needed to get into the building.  “Fortunately, we have quick neighbors who called 911 immediately and the firemen were very quick to put out the vegetation fire before it got to one of the church buildings,” he posted on the Mt. Helix Next Door forum. “Truly hope they catch the arsonist.”

Several other neighbors posted that they were awakened by the sound of emergency sirens, frightened to see smoke and flames close to their homes while the Lilac Fire was raging in North County.

“Someone put my family, neighbors and community in danger,” Corey Smith wrote, also voicing thanks to the first responders.  But he adds, “Attempted arson on a church is a big deal; during a red flag warning with several fires in the county is nothing short of domestic terrorism.”