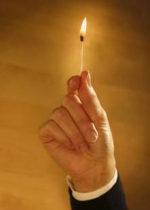 July 9, 2014 (San Diego)--The San Diego Sheriff’s Department has announced the arrest of an arsonist suspected of starting the Cocos Fire in San Marcos, which destroyed 40 homes and charred nearly 2,000 acres in May, spreading swiftly due to high winds and hot, dry weather conditions.

A juvenile is in custody for the crime.  There is no information linking the suspect to any other fires, according to a press release issued by the Sheriff. No other information is being released at this time since the case has been submitted to the District Attorney’s office for review.