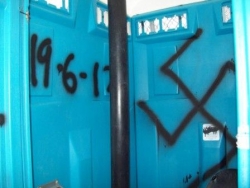 September 4, 2009 (Vista) – Vista is not in East County. But an arsonist anywhere in our County poses a threat to us all. One spark on a windy day can spread a fire far beyond its origins.

San Diego County Sheriff's Vista detectives and Crime Stoppers seek the public’s help to find an arsonist who torched public vehicles, causing $50,000 in damage. Authorities also seek vandals who sprayed racist/hate graffiti, including swastikas, on public vehicles and buildings at 1790 Shadowridge Drive in Vista, a fenced yard owned by the City of Vista. Below is a description from Crimestoppers: 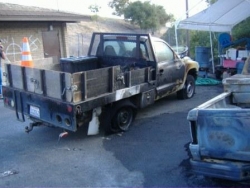 On August 20, 2009, at about 2300 hours, the Vista Fire Department responded to a fire at the same fenced yard at the park. Two vehicles and part of an out building were engulfed in flames. The same type of hate/racist graffiti was discovered on a building inside the yard. The fire was determined to be arson and caused about $50,000 worth of damage.

San Diego County Crime Stoppers is offering up to a $10,000 reward in this case; $1,000 for arrest and $9,000 for arrest and conviction to anyone with information that leads to the arrest of the suspect(s) responsible for this arson.