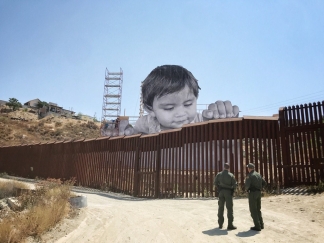 September 10, 2017 (Tecate) – “The history of humanity is the story of people migrating,” French artist JR posted on his Twitter feed.

Drawing attention to the plight of innocent children denied entry to, or facing expulsion from the U.S. under President Donald Trump’s tough policies, JR erected a 70-foot-tall mural titled Kikito. It depicts a one-year-old boy peeking over the border fence in Tecate, visible from the U.S. side of the border in San Diego’s East County. 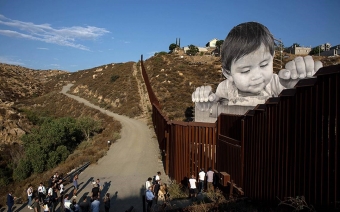 The work, which the artist began work on a month ago, has gained national media attention, with reports in the Washington Post, New York Times, Los Angeles Times, and The Hill in Washington D.C., to name a few. It’s also drawn crowds locally.

“At 1 year old, you don't see the frontier or which side is better. For this kid, there are no walls or borders.”  @JRart

The action comes as prototypes of a solid border wall are set to be erected in San Diego’s Otay Mesa, with plans to ultimately obstruct the entire U.S. border. Trump has also stepped up detentions and deportations, also announcing end of the Deferred Action for Childhood Arrivals (DACA) meaning unless Congress takes action in six months.  “Dreamers” brought here as children can be deported. 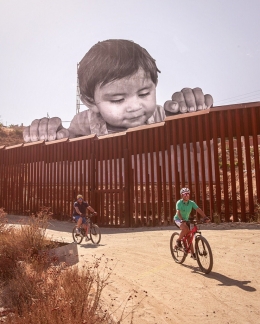 JR hopes his artwork can change hearts and minds.  He believes it’s “all a matter of perspective,”  adding in another Tweet, "What you see can change who you are" #NoBorders #Mexico #USA.

A Twitter user named DebS called the work “amazing and soul restoring,” adding in a message to the artist, “This is both amazing and 'soul restoring'. your beautiful art rises above the wall in more ways.” 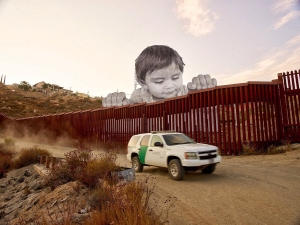