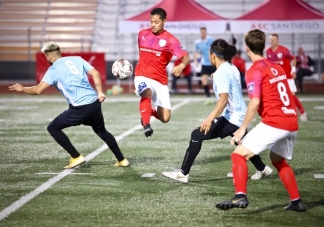 June 10, 2019 (San Diego) - This past Saturday night, Mission Bay Stadium was host to an epic match between ASC San Diego and NPSL newcomers City of Angels FC. It ended with a stunning 6-0 victory for ASC along with three very necessary points in conference standings. Throughout the 2019 season the same four teams (ASC, OCFC, FCAZ, FCGS)  have been battling for seat in the top three positions of the Southwest Conference. With only the smallest of margins separating them there is zero room for error in the few remaining weeks. The race for the NPSL postseason is at critical mass.

From opening kickoff all the way through the final whistle ASC San Diego had total control of all aspects of the match. The front line was a well oiled machine. Their passing was crisp and on point and they dribbled around the City of Angels defenders with ease giving plenty of chances to plant the ball deep in the back of the their opponent’s net.

Mike Semenza opened the floodgates in the seventh minute. He blasted a shot that just clipped the post but scrambled back to get his own rebound which he promptly put past the City keeper.

This marked the start of a scoring frenzy for ASC, who grabbed an incredible four goals in the first half.  Two of those were from the skilled feet of midfielder Christian Enriquez in less than a four-minute span.

In the 20th minute a short, sweet pass from teammate Felipe Liborio allowed midfielder Ozzy Ramos to open his account.

The second half was wash, rinse, repeat. ASC San Diego retained all control. The tempo after the break was on par with what was displayed in the first half by the men in the red kits.

While the back field didn’t see as much action throughout the match,  the few times they were called upon they gave no doubt that they were just as prepared. Team captain Kuba Waligorski stymied several COAFC attempts to get in scoring range and those few that did get in front of ASC’s net, keeper Jean Antoine adeptly put to rest.

ASC forward Elijah Rice found the back of the net on two separate occasions before the final whistle sounded completing scoring for both sides. This would be the icing on the cake as it brought ASC’s goal total to 6 while keeping the away side from scoring for the entire 90 minutes. The final of 6-0 was an incredible end to a flawless match.

Next week (June 15), ASC San Diego is on the road to square off against arch rival Orange County FC. As it stands there are only 2 points separating these two powerful teams, both seeking postseason action. OCFC having the slight advantage, this is a match not to be missed and a definite must win for ASC.

ASC will be back at home on June 22 when they will play Oxnard Guerreros FC in the final doubleheader of the season at 7 p.m. ASC San Diego women will play LA Galaxy San Diego at 4 p.m.  Buy one ticket, attend two games!