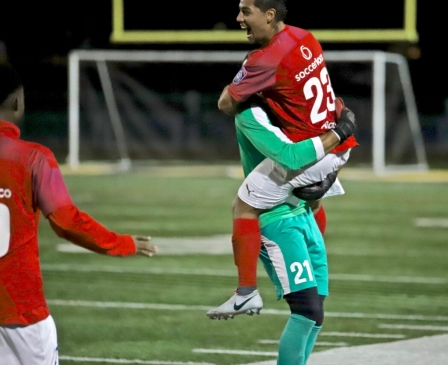 June 25, 2019 (San Diego) -  ASC San Diego celebrated a 6-0 rout over NPSL rivals, the Oxnard Guerreros, at home at Mission Bay Stadium this past Saturday in their final effort to keep their playoff hopes alive in the Southwest Conference. ASC no doubtedly needed a big win which would create a four point cushion over fellow postseason hopefuls Orange County FC heading into the final week.  They did not disappoint.

ASC started the match just as they finished:  With dominance.  In the sixth minute, ASC opened up the scoring with a thumping header from star forward Elijah Rice off of winger Mike Semenza’s perfect delivery.

The rest of the first half saw ASC enjoy most of the possession as they looked to unlock the Oxnard defense for a second time. In the 39th minute, ASC midfielder Ozzie Ramos was taken down in the box by a Guerrero defenseman resulting in a penalty kick. Christian Enriquez made no mistake as he smashed the ball into the upper left corner, leaving the Oxnard keeper no option for a save.

After the break tensions were visibly higher than they were in the first half. Oxnard wanted revenge and ASC wasn’t giving in. With goal differential possibly playing a significant role in the playoff race, the men in red knew a two goal cushion would most likely not be enough to secure their place.

Eight minutes in, ASC San Diego took advantage of a freekick as midfielder Ozzie Ramos pounded a low driven shot through the opponents wall taking a deflection past the stunned Oxnard keeper to make it 3-0.

A few minutes later the Guerreros were given their only real chance to get a ball between the pipes when they were awarded a penalty kick. ASC’s Antoine read the Oxnard striker’s shot perfectly as he dived to his left to make an incredible save.

Antoine’s effort seemed to spark life into ASC as they wrapped up the remaining thirty minutes scoring a huge, three additional goals. In the 64th minute, Elijah Rice found himself in on goal as he secured his second of the night and his seventh of the regular season with a venomous shot off the post and in.

The last two came after the 90 minute mark as the team made a final push. Felipe Liborio left the crowd in awe after hitting a screamer into the top left corner from 25 yards out to make it 5-0.

Midfielder Ewout Gouw grabbed ASC’s sixth and final goal with a tap in courtesy of ASC youth product Arman Samimi for his second assist of the night. 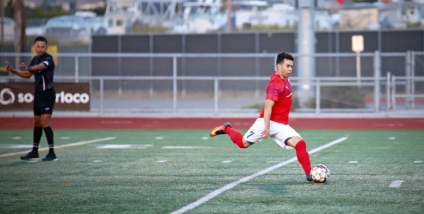 The victory was solidly theirs. ASC San Diego left the pitch with nothing to do but patiently wait as the rest of the conference finish their remaining matches in the 2019 NPSL regular season. After FC Arizona and FC Golden State clinched their post season bids over the weekend, all eyes will be on Orange County FC as they play their final two games of regular season play.

Thanks to an incredible spark of form in the second half of the season, winning eight out of their last 10 matches and outscoring their opponents 27-5 in the process, ASC San Diego has lifted themselves into the third and final playoff spot leading OCFC by four points and a +1 goal differential. ASC’s faithful will soon know if it will be enough to extend their season by at least one more match as OCFC will play their final two regular season matches starting Wednesday, June 26th against AS Los Angeles and wrapping up with a contest against Southwest Conference champs FC Golden State on Saturday, June 29th. Both will be away matches for OCFC.

Regardless of the outcome of those matches, it is no question ASC San Diego have had a historic 2019 campaign. Finishing off as the Southwest Conference’s best defense, including recording an incredible 10 clean sheets in 18 matches is nothing but fantastic for Coach Ziggy Korytoski’s side. Not to mention achieving this all while averaging 2.77 goals per game will be nothing but a boost for ASC San Diego as they soon begin their new and exciting journey into the NPSL Founders Cup.