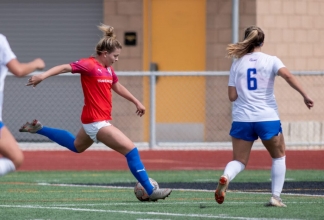 May 15, 2019 (San Diego) - Despite an incredible late effort from Natasha Kai, her 88th-minute goal was not enough for the ASC San Diego women's team to grab the win in their first ever match as a team.

Kai, a forward for ASC, was doing double duty and helping out the back line, including hitting a magnificent header that knocked away a powerful cross from a San Diego Surf winger.

Both sides saw several scoring opportunities throughout the first half, but the San Diego Surf were the first to find the back of the net with a breakaway from #26 Amber Tripp that made it in just past the post. ASC San Diego had an answer in the 39th minute with a penalty kick from midfielder #7 Nikolina Musto, leaving the teams tied three all at the break.

The start of the second half was a scoring bonanza for the San Diego Surf with three goals being scored in the first 15 minutes.

ASC continued to drive forward determined to get those three back as goals in the 80th and 88th minutes by #6 Natasha Kai kept hopes high. Unfortunately, the final whistle is blown and ASC was left with a final score 3-4 to drop their premier match in the WPSL.

On May 18th, ASC San Diego head to Carlsbad to play LA Galaxy San Diego at 5 p.m. Then on Saturday, May 25th, they will be back on their home pitch for another doubleheader with their men’s team counterparts at Mission Bay Stadium.