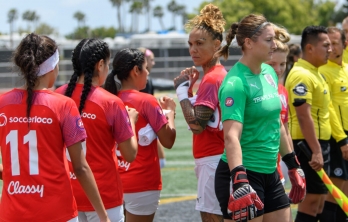 May 20, 2019 (San Diego) - LA Galaxy SD’s near point-blank goal scored in the 65th minute proved to be the winner Saturday night in ASC San Diego Women’s second WPSL match of the 2019 season.

LA Galaxy SD were first on the board when a 30th minute cross in from the right wing found the LA Galaxy SD #10 streaking into the middle of the box to put the ball home for a 1-0 lead. Later, in stoppage time of the 1st half, an Anna Gomez Vila pass found Monica Navarro, near the top of the box, who fired a shot into the top right corner to make it 1-1 going into the break. Most of the first 45 minutes saw ASC San Diego on the front foot, but not many chances were created.

Keeping the ASC San Diego back line under constant pressure in first 15 minutes of the 2nd half, LA Galaxy SD finally broke through in the 66th minute for a 2-1 lead. A perfectly weighted ball through the back line found a streaking right winger who hit a low cross into the middle of the box. The cross landed at the feet of a wide-open LA Galaxy SD attacker who passed it into the net.

After surrendering the 2nd goal, ASC San Diego went into attack mode. In the 71st minute, a long Kori Butterfield pass down field found a running Natasha Kai. After fighting off a defender to be first to the ball, the goalie was there to scoop it up. In the 90th minute, a long diagonal pass from Nikolina Musto finds Kai, making another run, who is tripped up from behind by the last LA Galaxy SD defender right outside the box. The defender was set off with a straight red card. Devon Molina’s free kick was high and over the crossbar. In stoppage time, ASC San Diego kept the pressure on, but were unable to equalize.

ASC San Diego Women will be back home next Saturday, May 25th, to take on the San Diego SeaLions. The match is slated to begin at 4pm at Mission Bay Stadium.