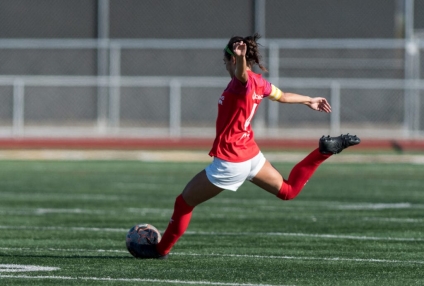 LA Galaxy San Diego goalkeeper Avrie Fox came out to attempt a save but made a costly mistake letting the ball slip through her hands as she dove. Navarro got a foot on the loose ball and slotted it smoothly over the line to give ASC the early lead.

ASC maintained control the tempo of play the majority of the 90 minutes. They also outshot the Galaxy throughout, unfortunately many of their attempts were just off their target.

ASC San Diego goalkeeper Tia Harrison made several momentous saves on both sides of the halfway point. But in the 78th minute, she relented when LA Galaxy’s Raleigh Loughman took a throw-in at the 40-yard line, quickly turned it and delivered a pass to a waiting Myah Merino. Merino, heavily blocked by ASC defenders, picked up the lucky pass and touched it in just past a diving Harrison evening the score at one.
The end of the match saw ASC giving their all in a rally to get another between the pipes before the end of the match. They were able to create several attempts that resulted in near misses.
The final whistle sounded and it was a draw after 90+ minutes.
ASC San Diego (1-5-1) is on the road for the final match of their premier season in the WPSL. They will meet the San Diego Paceiro Ladies at James Madison High School.  The match is at 1 p.m.