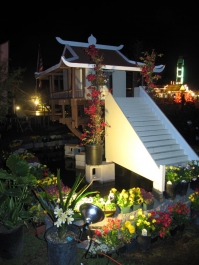 February 10, 2013 (San Diego) - Rain, thunder, chilling wind, and even a hail storm could not stop the Kearny Mesa Lunar New Year Festival from taking place. Yesterday, elected officials and visitors were treated to a tour of the "Asian Village" where they learned about the cultural significance of each village building or structure. The evening concluded after a New Year's Eve concert that featured the top artists from Asia Entertainment Inc, and the Little Saigon Idol.

Festival organizers said that the Festival will open again today regardless of rain, shine, or ice.  Sunday's entertainment will include an exciting Miss Teen Traditional Dress Beauty Pageant.

On Saturday, the festival opened with Mayor Bob Filner and Councilwoman Marti Emerald presenting a proclamation to the Kearny Mesa Recreation Council thanking them for sponsoring the Festival and for promoting Asian culture.  Also present was Assemblymember Toni Atkins who publicly congratulated the Little Saigon Foundation, based in City Heights, and the Kearny Mesa Recreation Council for putting on the event.

The event is being held at  Kearny Mesa Park, near Mesa College at 3170 Armstrong St. from 10 a.m. to 10 p.m.  Admission is $5 for adults and $4 for children.  Thousands attended yesterday's opening day ceremonies.