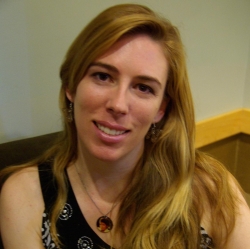 If a writer is working on a story and has hit a rough patch -- the plot isn't progressing as planned, the characters are starting to do odd things, the prose just isn't coming together -- do you have any techniques you could recommend to work through those? What is the hardest part about being an author? – Ekta Garg

Sherrie: There are several things you can do if you are stuck. When I was writing my novel, I thought I was wasting time (i.e. procrastinating) when I was researching the history of the war. I also got really fascinated with the leftist poet, Roque Dalton, and started reading everything I could find about him. Then I ordered several of his books, many of which were published posthumously, and started devouring his work, both in English and Spanish.

As it turned out, all that procrastinating ended up being a really good thing. For one, it made the story much richer. But the biggest change was the addition of Roque Dalton to the story. He was dead already, but I made my main character related to him so it became a more compelling reason for my protagonist to go to El Salvador.

Another thing that a well-known author (I wish I could say for sure which one) wrote as advice, is to go back and read the writing you are planning to add to. I started doing that every time I opened the document and it made it not so scary as I said “I’m just going to read it, not necessarily write,” but I always did write. By then I was writing, editing or revising something everyday.

As for your second question, the hardest part of being an author is to keep going back to the story, to trust that it will all get worked out by the end and whatever doesn't get worked out can be deleted. Or, if you are like me, and can't bear to delete anything, you can save it for another story.

Sarka-Jonae: I've never had writer's block but I have had writer's lack of motivation. I've also suffered from some severe cases of I-don't-want-to-itis and Do-I have-to syndrome. The trick about re-reading what you've written free of the expectation of writing more, and that motivating or inspiring you to start writing again, is something I shared at an author panel I organized in April at the Grossmont Center Barnes & Noble. Since Sherrie was there too, she might be thinking of me. Nice to know people are remembering my advice even if they are forgetting the source.

I'd say the hardest part of being an author is writing book after book knowing it could take publishing a series or two before you reach success. But as Shia LaBeouf would say, “Do it! Just do it! Make your dreams come true.”

Self publish or publisher? How long does it take you to write a novel? – Kelly D. Smith

Sherrie: It depends; do you want to have more control over your writing? Or are you willing to make changes even though you may not agree with the suggested change? The other question you need to ask is “How long are you willing to wait to get this product brought to life?”

You have to wait to find the right agent, then, the agent shops your manuscript. How much she puts into this process depends on how much she likes the ms. I decided no one was going to love my baby as much as I did so I ran a Kickstarter campaign to help pay for editing and then dug into my own funds to pay for the cover design, formatting and uploading. Fortunately I had been all over the social sites for enough time that I found another writer who gave me reliable referrals.

I would caution any writer who is considering self-publishing to be careful not to let your work go out too soon. That is the biggest problem with self-publishing. You have to be in this for the long haul and have a lot of patience and perseverance.

As to how long it takes to write a novel, that also depends. I knew more than thirty years ago that someday I was going to write a story about the Salvadoran civil war. I started working on my MFA in Creative Writing, thinking that I would be forced to write this story that way. That turned out not to be true. So, in my case, it took about six years to write my novel, but if you already understand the basics of a story, I’d say you could at least have a decent draft in three years.

Sarka-Jonae: I got the idea for Between Boyfriends in college, but since I put myself through school I had no time to start writing it. When I finally began, it took probably two years to get a decent draft. Agents can me some positive feedback and useful criticism, prompting a serious overhaul. Long story short, it took probably four years of writing, not including time off, to produce a publish-worthy manuscript.

My second book took less than a year and my third only six months, not including the time my editor and proofreader needed to do their jobs. I'd say six to eight months for my fourth and fifth books too. I suspect part of this had to do with the first book being longer and subsequent books being spinoffs or sequels, so I already knew the characters really well.

SJ's Favorite Freebies – My romantic comedy Between the Sheets is free on Amazon from June 5-8. The contemporary romance Love Bats Last by USA Today best-selling author Pamela Aares is free now as is the Sexy Love Box Set by C.C. Cartwright. The romantic mystery novel The Heiress of Santorini by #1 best-selling author Angel Sefer is free June 11-14.

Send them to Sarka-Jonae Miller through Twitter @sarkajonae, Facebook, or via her author website. Alternatively, talk to her in person on June 20 at the Oceanside Barnes & Noble when SJ and eight local authors will be holding a panel from 4-5PM. More events found on SJ's events page.

SJ is a local author, book marketing manager, publicist, and columnist who writes chick lit and steamy romance based in San Diego and Los Angeles. Learn more about SJ and her books here.