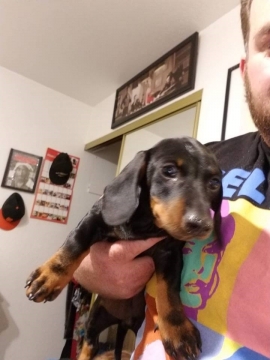 April 29, 2018 (Spring Valley) – You could say that 71st Assembly district candidate James Elia’s campaign is going to the dogs – after adopting an abandoned dachshund puppy.

After a doggedly determined day of canvassing precincts, Assembly candidate James Elia says some volunteers wanted to call it a day.  But he adds, “I believe in a little thing called fate.”

When volunteers headed out to hang campaign signs, Elia’s brother, Michael, spotted a box beside a freeway offramp in Spring Valley. Inside was a puppy about eight weeks old with no collar or chip.

“Someone left him in a box and ditched him off the side of the road...so...he's ours now,” Elia posted on Facebook. “He's our campaign dog, so we are naming him BERNIE!”

He also had this message for anyone with an unwanted pet.  “PLEASE PLEASE PLEASE, if you have animals and can't keep them find someone who can or take them to the Humane Society.”  He promises to provide "pupdates" on the rescued dog's progress.

Elia faces a tough race against Assemblyman Randy Voepel and Republican challenger Larry Wilske, but may have won the hearts--and maybe votes—of animal lovers across the 71st Assembly district.