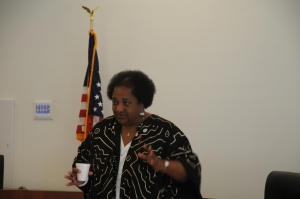 April 20, 2014 (Lemon Grove)--Assembly Member Shirley Weber (79th-D) held a coffee day with constituents at the Lemon Grove Library on April 19. Weber explained that the issues that face the district are as diverse as the area she represents, adding that the issues of Lemon Grove are ever present in her mind.

Weber also highlighted the mobile offices that her staff uses to keep in contact with residents of the district, ranging from Chula Vista, to La Mesa, to Lemon Grove, to Fashion Valley. These offices let her office maintain contact with residents, though her permanent office is in downtown San Diego, at 1350 Front Street, Suite 6046. She also said that all Members of the Assembly, including Speaker Elect Toni Atkins (76th- D) and Lorena Gonzales (80th-D), who serve the urban region have their offices downtown in the same building. 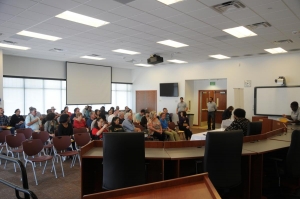 Weber is trying to get a bill making pre-kindergarten mandatory in the State as part of the zero to five initiative.This initiative intends to give a chance for California kids to develop and be ready for school. It is part of the Race to the Top initiative utilizing federal funds.

ECM asked about Common Core and whether this applies statewide to all school districts. Weber indicated that it does. All school districts in the state have to implement Common Core.  Common Core mandates what children should know in English and Mathematics at the end of each school year, and it is mandated across many states, not just California. It is again, part of the Race to the Top Initiative. The State Department of Education has its standards at its website:

One of the goals to invest in education early on is to avoid the “prison system eating the budget of the state of California,” Weber observed.

On this note, a constituent asked Weber if it is time to return flexibility in sentencing to judges and perhaps revise or cancel the three strikes law, which requires life in prison for certain third offenses. The constituent gave the example of a case here in San Diego five years ago where a man was given a harsh sentence for stealing a DVD.

Weber said that there is movement in the Assembly to revise these policies and return discretion to judges. But also there is a movement towards rehabilitation in prison. After  “We got angry that they got education,“ but they did not re-offend.  So they are looking at ways to reduce re-offense rates.

The tough on crime initiatives were enacted at the demand of a public angry that prisoners got an education in prison, but people on the outside did not. Comparative studies of prison systems reflect that Nordic countries have lesser re-offense rates, but they also invest in rehabilitation. We, for the most part, do not. Therefore, inmates tend to come out as better crooks, some have suggested.

Weber also highlighted the passage of AB 173, which has expanded the list of pre-approved contractors for Higher Education from 50,000 to 250,000. This has cut quite a bit of red tape, allowing small businesses to participate in the granting of jobs without as much of a hassle. This bill has been very popular with small business owners, as it has expanded opportunities in contracting, she added.

Finally two issues were highlighted in questions from the audience. One was higher education—including expanding both accountability for private schools that do not deliver and raising awareness of trade education through apprenticeships for young people. A member of the Electricians Union asked Weber about this, and she agreed these options need to be publicized. Apprenticeships allow young high school graduates to learn a trade over five years, while getting paid. These are good jobs, and students don’t incur debt. So the state is willing to support these efforts.

She also said that she opposed AB 1531, which would make all Charters fall under the oversight of a school board. Some do, and that is by agreement with the school board, but some don’t.

Assemblywoman Weber also said that public schools don’t perform due to lack of parental oversight, and that people need to get more involved in oversight of school boards. Weber would like to see more parents, for example, attend board meetings regularly. As a former member of the San Diego Unified Board of Education, she encouraged people to hold school boards accountable and if need be, vote people out.

But she added, charters have the right to self run and self regulate by state law. If there are changes in the bill to reflect this very right, she would support it.

Weber also raised the issue of racially-charged environments on campus at some higher education intuitions. She highlighted a case on the campus of San Jose State where an African American student was more than just harassed. The treatment included chaining, use of a racial slur and Ku Klux Klan paraphernalia, according to Weber. She will chair hearings for the Select Committee on Campus Climate on this issue here in San Diego, since The University of California, San Diego has also ahd racial issues in recent years. The hearing will be held on Friday, April 25 from 12-3 p.m. at the Educational Cultural Complex Center, 4343 Ocean View Blvd in San Diego.