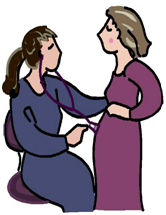 “This bill forces abortion-alternative organizations to refer women to a government program that provides state funding for abortions,” the website Stop AB 775 states.  The site further argues that the bill “undermines the patient and medical provider relationship” as well as religious freedoms, since many such pro-life programs are faith-based.  Opponents include the California Catholic Conference.

Butpro-choice  supporters say the measure is needed to protect women from misleading information and lack of medical professionalism.  The undercover investigation found that a so-called medical advisor at one clinic misidentified an IUD (intra-uterine device) as a baby.   The NARAL investigation found that 91% of the crisis pregnancy centers told women that abortion is linked to breast cancer, infertility, miscarriage or suicide-findings NARAL calls “blatant lies that have been disproved and rejected by the medical community.”

So what are the findings of reputable peer-reviewed medical journals and major medical professional associations on these issues?

While a full-term pregnancy can reduce risk of breast cancer, there is no credible evidence that abortion or miscarriage increases the risk of a woman getting breast cancer, according to numerous large-scale studies.  The American Cancer Society posted this information on its site regarding studies that looked for a link between breast cancer and abortion or pregnancy:

Several groups of experts have looked at the available studies on the possible link between abortion and breast cancer.

In 2003, the US National Cancer Institute (NCI) held a workshop of more than 100 of the world’s leading experts who study pregnancy and breast cancer risk. The experts reviewed human and animal studies that looked at the link between pregnancy and breast cancer risk, including studies of induced and spontaneous abortions. Some of their findings were:

The level of scientific evidence for these findings was considered to be “well established” (the highest level).

The American College of Obstetricians and Gynecologists (ACOG) Committee on Gynecologic Practice also reviewed the available evidence in 2003 and again in 2009. In 2009, the Committee said, “Early studies of the relationship between prior induced abortion and breast cancer risk were methodologically flawed. More rigorous recent studies demonstrate no causal relationship between induced abortion and a subsequent increase in breast cancer risk.”

As for impacts of abortion on fertility, the Mayo Clinic website states:

Generally, abortion isn't thought to cause fertility issues or complications in subsequent pregnancies. However, some research suggests a possible link between abortion and an increased risk of:

During a medical abortion, a woman takes medication in early pregnancy to abort the fetus. In a surgical abortion, the fetus is removed from the uterus — typically with a vacuum device, a syringe or a spoon–shaped instrument with a sharp edge (curet) — as a surgical procedure. Rarely, a surgical abortion can damage the cervix or uterus. In such cases, surgery might be needed to correct the damage before a woman can conceive again. Also, rarely the cervix can be weakened, leading to the potential for the cervix to open prematurely (incompetent cervix) in a subsequent pregnancy. This is more likely to affect women who have had multiple surgical abortions.

As for whether abortion increases risk of suicide, the American Psychological Association reported in 1990 that "severe negative reactions [after abortion] are rare and are in line with those following other normal life stresses."  The APA updated its findings in August 2008 to account for new evidence, and again concluded that termination of a first unplanned pregnancy did not increase the risk of mental-health problems. A 2008 systematic review of the medical literature on abortion and mental health found that high-quality studies consistently showed few or no mental-health consequences of abortion, while poor-quality studies were more likely to report negative consequences. In December 2011, the United Kingdom's National Collaborating Centre for Mental Health similarly concluded that abortion did not increase the risk of mental-health problems.

AB 775 would authorize the state Attorney General as well as city attorneys and county counsel to bring an action to impose civil penalties against facilities that fail to comply with the law’s requirements, if it is enacted.

A clause that would have required the Attorney General to post on the Department of Justice website  a list of facilities on which civil penalties have been imposed was amended out of the bill earlier this month.

The bill is coauthored by Assemblywoman Autumn Burke and Assemblyman David Chu.   It passed the Assembly 46-25 and will now advance to the Senate.